Skip to content
Normally, plants are fixed in the soil and do not move here and there. However movement is seen in certain cases. We are going to read about Tropic Movements in Plants. 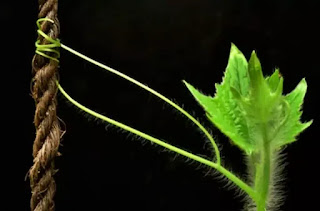 Chlamydomonas and Volvox show movement by means of flagella. Mosses and ferns are ciliated and move about in water. Plants show movement in response to certain stimuli like-light, water, gravity, wind and touch.
Some of the plant movements that we usually observe are as follows :
Opening and closing of stoma
Flower closing during night
Sunflower turns toward the sun
Movement of insectivorous plants and movement of roots in the soil
These movements can be divided into two categories.
(A) Tropic movements in plants (Tropism)
(B) Nastic movements in plants

A tropism is the movement of part of a plant either towards the source of stimulus (Positive) or away from it (Negative). These are the movements of curvature brought about by more growth on one side and less growth on the opposite side of plant organ induced by some external stimuli.
Depending upon the nature of stimuli these movements are of following five types:

The movement of plant parts in response to light is called phototropism. Most of the stems and flower stalks moves towards light and are called positively phototropic movements in plants.

It is a special apparatus in which if a plant is rotated neutralizes the effect The shoot continue growing of gravity. Horizontally and does not show any indication of curvature, since rotation causes equal distribution of auxin on all sides of the plant.

Equal distribution of auxin causes equal growth on all sides and no curvature takes place.

The movement of plant parts in response to the water is called Hydrotropism. Roots are positively hydrotropic as they bend towards the source of water.

Growth / tropic movements in plants made by plants in response to contact (touch) with a solid object are called thigmotropism.
These are curvature movements and are most apparently seen in tendrils and twiners.Whenever the supporting organ touches a support, it makes a curvature movement to get hold of the object and then tightens its hold.
In most plants, the curvatures of the tendrils which follow contact with a support are mostly the result of increased growth on the side opposite the stimulus.

Example : The plants such as bitter gourd, bottle gourd, grape vine and passion flower have stem tendrils which are positively thigmotropic and make these plants to climb up by winding around various types of support.

The plants such as peas and glory lily have leaf tendrils which are positively thigmotropic. These leaf also make their plants to climb up by winding around various types of nearby support.

There are also responses due to stimulus of contact, light, heat etc. In this case movement is not determined by the direction from which the stimulus is applied.

These are of following types :