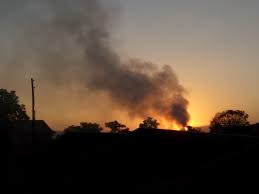 Pollution is an undesirable change in the physical, chemical and biological characteristics of environment. It is harmful to human life and other organisms. Agents causing pollution are known as pollutants.

It is the addition of unwanted constituents to air, water or land, which deteriorates the natural quality of the environment.

On the basis of environmental study, pollution is of following types :

Air pollution is the occurrence of foreign particles or gases into the atmosphere which are harmful to man, vegetation, animals and buildings.

Air pollution became a major problem only during industrial revolution. Since then the capacity of atmosphere to absorb huge quantity of pollutant gases is decreasing day by day.

1. Vehicular exhausts (automobiles) : The exhaust gases are produced by the combustion of petrol and diesel in the automobiles. The exhausts given out contain gaseous pollutants like CO, CO2 and SO2.

Even wearing of rubber tyres release rubber particles and speeding vehicles give out lots of dust in the atmosphere creating air pollution.

They are being produced by the industrial complexes like, small scale pottery and carpet weaving units to huge sugar, metal, cloth factories, oil refineries, etc. which give out all kinds of pollutants.

The toxic chemicals released during burning include oxides of nitrogen, SO2, CO2, CÓ and volatile organic chemicals. One of the most harmful pollutant of garbage burning is dioxin. It is known as carcinogen.

Brick kilns which are fire-heated enclosures for making construction bricks are the source of air pollution.

5. Smoke and Grit : Burning of coal and mineral oils, which are burnt in houses and factories, liberate smoke and the soot. These contaminate air.

Water pollution means decrease in the quality of water by the presence of various solid and liquid wwastes, which make the water unfit for human use.

Sources of water pollution are as follows:
1. Household detergents : The term detergent (cleansing agents) is applied to wash materials like clothes, garments and utensils The dirty water flows down the drain.

2. Domestic sewage : The major source of domestic wastes are kitchen washings (wastes), bathing, human urine, excreta and other household waste water. They are finally discharged into nearby water bodies, ponds, lakes or rivers.

In many cities, small towns and villages there is no permanent sewage treatment plant to remove the dirty part and release the clean water into nearby water bodies for disposal of these wastes.

Even dead bodies are disposed off in rivers specially in India. Ashes of dead bodies after ceremonies are flown into the rivers causing water pollution.

3. Industrial wastes : A large number of wastes including organic and inorganic chemicals are industrial complexes (small scales as well as large scale).

Major industries that contribute to the water pollution are chemical, textiles, leather, distillery, etc.
The chief pollutants are heavy metals, organic compounds and several toxic substances. Almost all the rivers is India are polluted with the industrial effluents.

4. Oil spills : These are accidental discharge of petroleum in oceans or estuaries. Oils when discharged into water, form a thick blanket on the water surface, curtailing oxygen supply and thus proves to be highly fatal to the aquatic life.

Soil pollution is the decrease in soil fertility because of the addition of some foreign elements. Soil is the most important component of the earth’s crust.

Almost all the industrial furnaces generate ‘flyash’ which is added to the soil. Surface mining and strip mining remove topsoil and even subsoil.

It is often dumped in public places, such as, streets, parks, picnic areas, bus stops, near shops and in the open areas outside the city.

Toxic acids are also produced from the heap of waste that leach down in the soil. Industrial waste in most cases is very toxic and can pollute the soil.

This leads to faster growth of bacteria which consumes larger amount of oxygen in water causing death of aquatic animals.

Another serious threat to the man’s environment is noise pollution. It is becoming an ever-increasing problem in this age of mechanical movements. Noise is unwanted sound which interferes with human communication, comfort, health, etc.

The number of auto-vehicles is fast increasing in the modern world. Traffic noise is particularly severe in the urban areas. Fast running trains also cause noise pollution along the rail tracts.

2. Jet aeroplanes : Taking off and landing off aeroplanes cause unbearable noise pollution.

5. Some other sources : Various industries, various types of electric appliances used in kitchens and houses are some other common sources of noise.

Radiation is the physical contamination of air, water and soil with radioactive materials. It is a form of energy consisting of high energy particles.

EFFECTS OF VARIOUS TYPES OF POLLUTION ON HUMAN HEALTH, CLIMATE AND ENVIRONMENT

Oxides of nitrogen decrease the oxygen carrying capacity of the blood. Dioxin (a carcinogen) causes reproductive, developmental and immunological problems in humans.

(b) Water pollution : This leads to some diseases like cholera, dysentery, jaundice, typhoid, ascariasis and diarrhoea. Hepatitis epidemic of Delhi in 1977 was due to domestic sewage.
(c) Soil pollution : Heavy metals enter food chain and are consumed by humans, cause serious diseases or even death. The pesticides used in agricultural farming may cause health problems.
(d) Noise pollution : Interferes in communication, disturbs peace of mind, disturbs sleep and leads to nervous irritability, lowers efficiency of work, a sudden loud noise may damage the eardrum, and finally a prolonged noise could lead to deafness.
(e) Radiation : All body cells may get affected to varied degree, the actively growing and dividing cells get quickly damaged, it injures the surface cells of cornea of eye making it opaque and this may cause snow blindness, they can cause mutations in DNA. Radioactive substances can also cause cancer.

Effects on Climate and Environment :

(a) Acid rain : Due to increased industrialization, automobile exhausts, domestic fires and combustion of fossil fuels, lot of emission of CO2, SO2 and oxides of nitrogen are swept into the atmosphere where they get oxidized into acids and then dissolve in raindrops falling on earth as rain. This is called acid rain.

It results from the fact that certain atmospheric gases, such as carbon dioxide, water vapour, and methane, are able to change the energy balance of the planet by absorbing long wave radiation emitted from the Earth’s surface.

Without the greenhouse effect life on this planet would probably not exist. It changes the average atmospheric temperature.

It has been observed that in the recent past, the level of CO2 in the atmosphere has increased from 290 ppm to 330 ppm.

The main reasons for this increase are deforestation and excessive burning of fossil fuel. At this rate the rise in the CO2 content will be doubled by 2020. It will result in the rise of global temperature, causing what has been termed as the Greenhouse Effect.

(In greenhouse heat is received but not radiated out). This mechanism is fundamentally different from that of an actual greenhouse, which works by isolating warm air inside the structure so that heat is not lost by convection.

The “greenhouse effect” is named by analogy to greenhouses but this is a misnomer. A rise in global temperature by more than two or three degrees may lead to melting of glaciers and polar ice caps.

It will cause flooding of low-lying coastal plains, e.g., Bangladesh, Lakshadweep, Andeman and Nicobar islands, etc.

It will cause increase in the flow of rivers, change in rainfall pattern and possible submersion of islands. All this would seriously affect the productivity of agricultural crops.

(c) Ozone layer depletion : Ozone (03) found in the atmosphere in the form of a layer is an allotropic form of oxygen. It prevents harmful ultraviolet rays coming down from sun into the earth.

They breakdown into chlorine atoms which in turn breaks ozone into oxygen (02) and nascent oxygen (O).

The disruption of the ozone layer called ozone hole would expose the earth to increased ultraviolet radiations which may cause increased skin cancer, sunburn, genetic disorders (mutations) and reduced productivity of forests and sea.