Skip to content
Human heart is a reddish brown, pulsatile, pumping centre. It pumps and collects blood to and from the various body parts. It is of the size of a human closed fist. It weighs about 300 g. It is a broad conical structure. Upper side of human heart is broad called base and the lower pointed side is called apex. 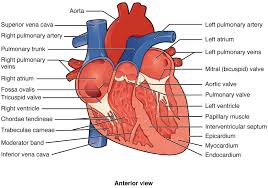 Location and protection of Human Heart

The heart is hollow, highly muscular, highly specialized blood vessel. It undergoes rhythmic beating. The heart consists of four chambers which are as follows :

The atria are a pair of thin-walled chambers present towards the base of the human heart. They are known as right and left atrium or auricle according to their position. The auricles are very thin walled chambers as they are to push the blood into ventricles present just below them.

From the left upper corner of right ventricle starts a large tubular pulmonary artery. It supplies impure blood to lungs. The ventricles are very thick walled chambers. The left ventricle has thickest walls as it has to push the blood to the remotest parts of the body such as toes of the feet.

Blood vessels entering and leaving the human heart, their apertures and valves

Deoxygenated blood from all the body parts is returned into the right atrium of the heart by way of two main blood vessels, i.e.

(i) Superior (Anterior) vena cava : I brings deoxygenated blood from anterior or upper parts including the head, neck, chest and arms and pours it into the right auricle through an aperture which is not guarded by any valve. It is also called Precaval.

This aperture is guarded by three leaf-like flaps (cusps) called tricuspid valve. One margin of this valve is fused with the aperture. Whereas, free margins are attached with whitish thread like chordae tendinae. These chorda tendinae arise from muscular projections called papillary muscles from the ventricular wall.

This aperture is guarded by two leaf-like flaps (cusps) called bicuspid or mitral valve, Free margins of the bicuspid valve are attached with the chordae tendinae. They arise from papillary muscles which are muscular projections from the walls of left ventricle.

(i) Pulmonary artery : It carries deoxygenated blood from the right ventricle to the lungs for oxygenation. Opening of pulmonary artery is guarded by three pocket shaped or half moon- shaped valves called pulmonary semilunar valves.
(ii) Aorta : It arises from the left ventricle. It supplies oxygenated blood to all the body parts by way of its various branches. Its opening is also guarded by three pocket shaped valves called aortic semilunar valves.

It is called myocardial infarction or a heart attack in popular language. It causes pain in the chest and is called angina pectoris. The cardiac veins collect blood from walls of human heart and pour it into the right auricle.