Skip to content
All metabolism begins with the chemical raw materials that are collectively referred to as food . Some organisms are capable of synthesising organic materials from inert inorganic substances . Such organisms are known as autotrophs . Whereas , others depend upon autotrophs directly or indirectly for the purpose of food and known heterotrophs . The autotrophic organisms are further categorized as
a) photoautotrophs and
b) chemoautotrophs . 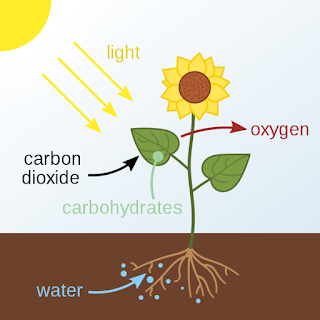 Photoautotrophs are the green coloured plants and some algae . They synthesise living matter ( organic compounds ) from the inert inorganic materials in the presence of chlorophyll and solar energy . Whereas , chemoautotrophs utilize energy released by their chemical processes , for the purpose of synthesising their food , e.g. sulphur bacteria.
On the other hand , heterotrophs depend upon the autotrophs directly or indirectly for the purpose of their food . facile Photosynthesis is a physiological process by which green plants in the presence of sunlight and chlorophyll prepare food in the form of carbohydrates using carbon dioxide and water .

Four important materials are required for the process of photosynthesis . These are :

It is the raw material for the formation of glucose . Plants obtain CO2 from the atmosphere through the stomata . The stomata open or close depending upon the need of CO2 by the plants .

It is the second raw material for the process of photosynthesis . Plants get water from the soil by absorption.

The Tradiant energy is trapped from the solar energy ( sun ) by the green coloured pigment chlorophyll – present in the chloroplast .

These are green coloured plastids found in the green coloured part of plants . They are very abundant in the leaves ( normally 40-50 in each cell ) . In the leaves they are present mainly in mesophyll cells located between upper and lower epidermis ( i.e. , in palisade cells and spongy cells ) . There may be 50,00,000 chloroplasts per square mm of leaf surface . Chloroplasts are minute , microscopic cell organelles of plant cells . Each chloroplast can be differentiated into three parts i.e.
a) membranes
b) stroma and
c) thylakoids.

( a ) Membranes : The chloroplast is covered by a double membraned envelope . Each membrane is  lipo proteinaceous in chemical nature and selectively permeable . In – between the two membranes is present a narrow space called periplastidial space .

( b ) Stroma : The chloroplast is filled with a colourless ground substance or living matrix called stroma .

The vital pigment , is found in walls of thylakoids . The chlorophyll is a highly complex organic substance . It is made of carbon , hydrogen , oxygen , nitrogen and magnesium . There are five types of chlorophyll molecules out of which commonly occurring and most abundant are chlorophyll – a and chlorophyll – b .

The chlorophyll molecules are associated with the membranes of thylakoids . About 250 molecules of chlorophyll form one quantasome . It is capable of trapping one quantum of energy and converting into chemical energy . This process is called photochemical act .

In addition to chlorophyll molecules , the chloroplasts also contain accessory pigments carotenes and xanthophylls . These pigments help in the transference of light energy to chlorophyll – a . Chlorophyll is highly sensitive to light . Too much light may destroy it .

Mechanism of opening and closing of Stoma :

According to sugar concentration theory ( Old one ) :

According to potassium ion concentration theory ( New one ) :

The opening and closing of stoma depend on the generation of potassium ion gradient . During day , photosynthesis occurs in chloroplast of guard cell which leads to the production of ATP in the light reaction phase . ATP pumps the potassium ions of adjoining cells into guard cells .

Mesophyll cells ( palisade and spongy cells ) in the leaves are the main centre of photosynthesis . During daytime the chlorophyll molecules trap solar energy . This trapped energy is utilized for the synthesis of organic compounds ( glucose ) using CO2 and H20 as inorganic ingredients .

The 6 molecules of water liberated in the equation above are those that are reformec during a chain of reactions and not out of the original ones .

FORMATION OF STARCH AND OTHER ORGANIC COMPOUNDS

The process by which several molecules of glucose are transformed to produce one molecule of starch is called polymerisation . The starch is insoluble in water . It is used for the storage of food in the plant cells . In some plants glucose is converted into sucrose or other sugars .

FATE OF END – PRODUCTS OF PHOTOSYNTHESIS

Photosynthesis results in the formation of three types of end – products :

Some of the glucose produced during photosynthesis is oxidized immediately for the release of energy , required for the metabolism of cells . The rest of the glucose is converted into insoluble starch . It is stored in the cells as reserve food material . It is also transported to non – photosynthetic cells in the form of sucrose .

Water produced during photosynthesis is reutilized for the continuity of this process .Oxygen produced during photosynthesis is partially utilized by the plant cells for oxidation . Rest of the O2 is released into the atmosphere through the leaf surfaces , specially through stomata . The oxygen released helps to maintain the air composition constant .

This 02 is used by the animals and plants for the purpose of oxidation of glucose during respiration . The process of respiration releases CO2 which is utilized by the plants in photosynthesis . It means respiration and photosynthesis are antagonistic to each other and help to maintain O2 and CO2 concentration in the air constant .

Stomata are primarily meant for the diffusion of CO2 which is to be used for photosynthesis . But when CO2 diffuses in at the same time , a large amount of H2O is lost due to transpiration . So , we say that the plants have to pay the price of photosynthesis in the form of transpiration .

Fate of carbohydrates formed in photosynthesis

Carbohydrates formed in photosynthesis are used up in three main ways :

TRANSPORTATION ( TRANSLOCATION ) OF ORGANIC COMPOUNDS IN THE PLANTS

Primarily , the process of photosynthesis i.e. , formation of glucose and other organic compounds takes place in the cells of leaves . But these organic compounds are needed by all the cells of a plant . Formation of glucose in the leaf cells is continuous and very rapid . It cannot be transported to other cells with the same rapidity .
That is why , most of the glucose is converted into insoluble starch for the purpose of temporary storage. At night the stored starch is reconverted into soluble sucrose . The soluble sucrose in the form of solution is transported ( translocated ) to all the cells of the plant .
Sucrose passes through the veins of leaves down through the phloem of the stem and roots . The sucrose is converted into glucose in different cells . It is partially oxidized in respiration to release energy . Rest of glucose is reconverted into starch for the purpose of storage .

ADAPTATIONS IN LEAF FOR PHOTOSYNTHESIS

Photosynthesis is the most important and basic process which sustains life on this earth . It has manifold significance , such as :

Carbon is the building material of all the organic compounds found in the living cells , e.g. carbohydrates , lipids , proteins and nucleic acids . In the biosphere , there are 4 sources of carbon :

The carbon cycle can be defined as a series of chemical reactions in which carbon as an element from carbon dioxide is removed from the atmosphere , used up by living organisms in their body processes and is again returned to the atmosphere .