‘The process of Fertilization in Plants’, if you have any doubt related to this topic, that is going to be clear in this article.

But, before knowing more about Fertilization, you should know ‘what is fertilization in plant ?’ first.

So let get start…

Successful pollination is followed by fertilization.

Fertilization is the fusion of the nuclei of male and female gametes leading to the formation of zygote or oospore. 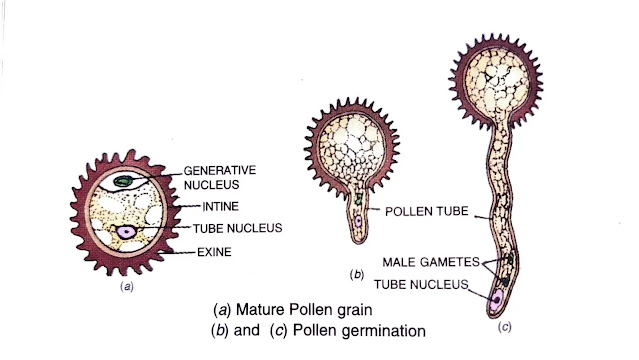 According to Wikipedia, Fertilization is the fusion of gametes to give rise to a new individual organism or offspring and initiate its development.

Processes such as insemination or pollination which happen before the fusion of gametes are also sometimes informally called fertilization.

Process of Fertilization in Plants

Before understanding more about the process of fertilization in plants, you should read the following terms carefully.

The pollen grain is a microscopic and unicellular structure. It is covered by two layers. The outer layer is very hard and thick called exine. The inner layer called intine is thin walled.

The exine at certain places has pores called germ pores through which pollen tube emerges out during its germination. The pollen grain has two nuclei called tube nucleus and generative nucleus.

The ovule is a small structure present in the ovary. It is attached to the placenta by a stalk called funicle. The funicle provides nourishment to the ovule.

The ovule is covered by two protective layers called integuments. It bears a small opening called micropyle at one end. The ovule contains a structure called embryo sac.

In the embryo sac the following structures are present : 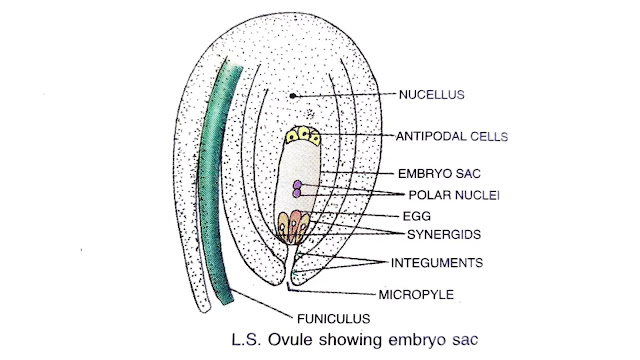 The embryo sac is surrounded by a nutritive tissue called the nucellus.

Also Read :
Parts of a Flower and their Functions
Types of Animal Tissues


How the process of Fertilization takes place ?

During fertilization a number of events take place which are summarized as follows : 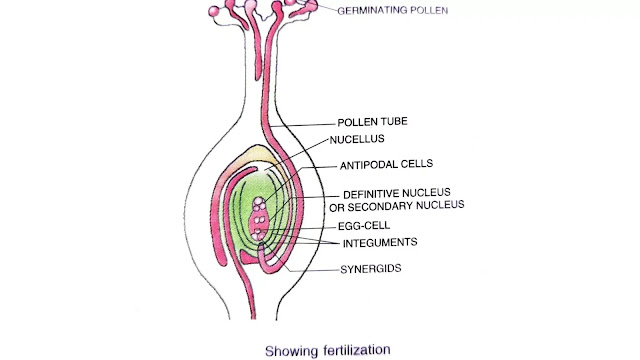 In angiosperms, the two different types of nuclei in the embryo sac (egg cell and secondary nucleus) are fertilized by two male gametes released by the pollen tube in the embryo sac. This is called double fertilization.

The fusion of second male gamete with the two polar nuclei is often referred to as triple fusion.

Synergids do not seem to be essential for the process of fertilization. They get degenerated after fertilization or even before it.

In case the egg cell fails to be fertilized due to any reason, the synergids, also called help cells, assume the role of egg cell. Antipodal cells also do not have any positive role to play and may disappear even before fertilization.

Post-fertilization changes in the ovule

After fertilization, a large number of changes take place in the ovule which can be summarized as follows :

After the process of fertilization, the whole ovary changes into a fruit. The fruit is defined as a ripened or matured ovary.

The wall of ovary may harden or may become fleshy and succulent fruit wall called pericarp. The fruit contains one to many seeds.

The formation of fruits has its own biological significance for the plants, such as:

Read about Cell Theory and Types of Plant Tissues.

The seed coat develops from the integuments of ovule. The seeds contain a potential plant or embryo. The embryo consists of tiny root and a small shoot.

There are one or two food laden cotyledons that provide nourishment to the developing embryo.

Seeds are very significant in the life of flowering plants, such as,

Q. What is Fertilization ?

Ans. Fusion of male and female gametes is called fertilization.

Q. How Pollen Tubes are produced ?

Ans. Pollen grains after their deposition on stigma, produce pollen tube that extends up to embryo sac. Two functional male gametes are released in the embryo sac

Q. What is Double  Fertilization ?

Ans. One male gamete fertilizes egg cell and the other fertilizes the definitive or secondary nucleus. This is called double fertilization and it is characteristic of angiosperms.

Q. What is Triple Fusion ?

Q. What happens to Ovary and Ovule after Fertilization ?

Ans. After fertilization, the ovule develops into seed and the ovary matures into fruit.

Q. What is called Parthenocarpy ?

Ans. In some cultivated varieties (such as banana, papaya etc.) the ovary may develop into fruit without fertilization. It is called parthenocarpy. Parthenocarpic fruits do not contain seeds.

Title : Describe the process of Fertilization in Plants with Diagram.

In this article, we have mainly discuss about the process of fertilization in plants. the following topics are covered briefly in this article.