Skip to content
As a result of the complex chemical reactions taking place within the body, certain metabolic waste products are formed.

For example : large amounts of CO2 and water are produced from metabolism of carbohydrates, fats and proteins. We are going to discuss about Excretory System, products from Excretory System & structure of kidney. 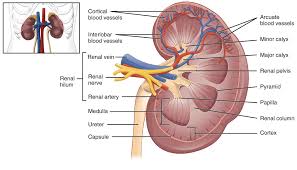 Ammonia, urea and uric acid are formed from other nitrogenous compounds. These products become toxic or harmful if retained inside.

They tend to alter the normal internal environment of the body. Unless these are kept within the normal range, cell functioning will deteriorate.

It may cause eventual death of the cell and possibly of the individual. Therefore, the metabolic wastes must be removed from the body for the continuation of life.

The elimination (removal) of all harmful and unwanted metabolic wastes (especially nitrogenous wastes) from the body is called Excretion.

Some other organs such as lungs, liver, large intestine and skin also eliminate certain metabolic wastes besides normal functions. They are known as accessory (additional) excretory organs.

The excretory system serves to eliminate from our body-

TYPES OF PRODUCTS FROM EXCRETORY SYSTEM

I. Respiratory waste products
The result of oxidation of glucose in the cells is the production of CO, and water with the release of energy. CO, being toxic is eliminated from the body during expiration from the lungs.

Excess of water is removed either by the formation of sweat or urine via Excretory System.

IV. Water
65% weight of our body is made of water. But, if it exceeds a normal limit it may lead to serious disorders, such as, oedema, increased blood pressure, etc.

Water is taken in with food and some drink it too. It is also produced due to the oxidation of food. Water is eliminated along with urine, sweat, faeces and expired air.

These are excreted out by liver cells from blood and secreted into the bile juice poured into the duodenum by common bile duct. These give faeces their yellowish brown colour. Some of these pigments a excreted in urine.

The human kidneys are reddish brown, bean shaped, slightly flattened organs. They are present just below the stomach, one on either side of the vertebral column, protected by the last two ribs. They are asymmetrical in position i.e. present at different levels.

Each kidney is about 10 cm long, 6 cm wide and 3.5 cm thick. It is a bean-shaped structure. Outer margin of kidney is convex and inner margin is concave.

In the middle of inner concavity is present a notch called hilus or hilum. Hilus leads to a space called renal sinus. The renal artery, renal vein, nerve fibre, lymph vessels and ureters enter or leave the kidney through hilus.

The kidney is bounded externally by a thin sheet of white fibrous tissue called capsule. In each kidney about 1.25 million, highly coiled tubules called uriniferous tubules or nephrons are present. These are the structural and functional unit of kidney.

Each uriniferous tubule is blind at one énd and opened at the other end, where it opens into a collecting tubule. All the nephrons are held together by connective tissue. There are also present a large number of blood vessels, lymph vessels and nerve fibres.