Skip to content
Plant physiology is the branch of Biology that deals with the study of functions of a plant. It includes functioning of cells, tissues, organs, organ systems and the organisms as a whole.
Here in this topic, you are going to study about, the most fundamental processes occurring in plants which have tremendous importance in their life. These are – absorption of water and minerals by the roots, ascent of sap, transpiration, photosynthesis and respiration. 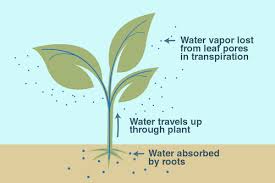 NEED OF WATER AND MINERALS FOR PLANTS

Water is an essential component of protoplasm. It is an excellent solvent in which the minerals and other solutes are dissolved. It is involved in almost all the chemical reactions that take place in a cell. Water is needed in plant body for the following purposes :

If a constant supply of water is not available, the physiological activities as mentioned above, would cease and the plants will die.

Need of minerals for plants

Minerals absorbed by the roots, are required by plants for the following purposes :

CHARACTERISTICS OF ROOTS FOR ABSORBING WATER

Plants have the potentiality to absorb water through their entire surface right from root, stem, underground root system is specialized to absorb water, as water is available mostly in the soil. The roots are immensely useful for the plants to absorb water because of the following reasons :

(iii) High concentrated solution – The root hair cells have high concentrated cell sap (an aqueous solution of mineral salts, sugar and organic acids, which is present in their large vacuoles). It has a higher solute concentration than the surrounding soil water.

This character is an important requirement to draw in water from outside by a process called osmosis. That is why, water diffuses from outside into the root cells.

(iv) Thin walls of root hairs – In roots, the most efficient region of water absorption is the root hair zone. Root hair zone has numerous root hairs. It is estimated that the root system of 4-month-old Rye plant bears 14 billion root hairs with a length of 10,000 km.

Root hairs are specialized for water absorption. Like all plant cells, root hairs also have two outer layers – a cell wall and a cell membrane. The cell wall is thin and freely permeable. It allows movement of water molecules and dissolved substances in and out of the cell.

The cell membrane is very thin and semipermeable which allows water molecules to pass through but not the larger molecules of dissolved salts.

MODES OF ABSORPTION AND CONDUCTION OF WATER AND MINERALS

The absorption of minerals and water from the soil by the roots and their exchange between the adjoining cells involve many processes such as :

The absorption of water by the solid particles of a substance (or cell, living or dead) in their dry or semi-dry state without forming a solution is called imbibition. The liquid (usually water) which is imbibed is called imbibate.

The solid substances which take part in imbibition are called imbibants. Imbibition increases the volume of imbibant. It develops a pressure called imbibition pressure. Common examples of imbibition that we observe daily are :
(a) Jamming of wooden doors and windows in rainy season.
(b) Dry seeds when soaked in water swell up and their seed coat bursts.

The phenomenon of diffusion is a matter of common observation in our daily life. For example, if a bottle containing some volatile perfume is opened in one corner of a room, its odour spreads throughout the room within few seconds.

Another example is when sugar is added in water, its molecules diffuse throughout the liquid, giving it a uniformly sweet taste.

Diffusion in our daily life

When sugar is put in a liquid, its molecules diffuse throughout the liquid, giving it uniformly a sweet taste. The fragrance of perfume from an open bottle also reaches us through the process of diffusion.

Theore- tically, the process of osmosis should continue as long as the concentration of solution on the two sides of a semipermeable membrane is not the same.

Water from the beaker diffuses into the thistle funnel through semipermeable membrane.

A stage comes when no osmosis takes place, even if the concentration of water molecules is not the same on the two sides of the membrane.

In this state of equilibrium the water molecules from the beaker tend to move inwards through the semipermeable membrane. But, the weight in column or column pressure from above holds them backwards. This is called osmotic pressure or force that acts on the system.

Tonicity is the amount of tension developed in a system on account of occurrence of solute particles in it. It pertains to the kind of external osmotic environment. It is usually determined when two solutions or systems are compared for their osmotic pressure.

The solutions are of three types when compared for their tonicity :

(b) Hypotonic solution – A solution outside the cell having lower concentration of solutes as compared to fluids inside the cells in which water molecules move from outside to inside of a cell, hence endosmosis.

(c) Hypertonic solution – A solution having higher concentration of solute molecules outside the cell as compared to the fluids inside the cell in which water molecules from the interior of the cell moves out, hence exosmosis.

When a plant cell is kept in water or hypotonic solution, it absorbs water due to endosmosis. It finally attains such a state that it cannot accommodate more water i.e., it is fully distended.

This state of equilibrium when no more water can enter into a cell is called turgidity and the cell is said to be turgid i.e., fully charged with water.

In this condition wall of the cell is stretched under pressure from inside and in its turn it presses the cell contents towards the centre of the cell.

Turgor pressure and wall pressure normally counterbalance each other and a state of equilibrium is maintained. There is no further absorption of water concentration of solutes inside the cell may be greater than that outside the cell.

If, at any time, the cell wall is unable to bear the turgor pressure, it ruptures and the cell content burst out. This is what happens when fruits and vegetables sometimes get burst.

A condition opposite to turgid in which a cell is not fully charged with water and the cell content is shrunken is called flaccidity and the cell is said to be flaccid.

It is the pressure developed in the roots due to inward movement of water, which helps in pushing the sap of plant upwards. Example :

Shrinkage of the cytoplasm of a plant cell from its cell wall under the influence of hypertonic solution is called plasmolysis. The cell in this state is said to be limp or flaccid. This condition is called flaccidity. It is the reverse of turgidity.

When a plant cell is kept in a hypertonic solution, the cytoplasm of the cell along with its cell membrane separates from the cell wall.

It gets concentrated in the centre or towards one side. The central vacuole diminishes. The cell is said to be plasmolysed and the phenomenon is called plasmolysis.

The process of plasmolysis occurs because of exosmosis. The water diffuses out of the cell because of higher osmotic pressure of hypertonic solution outside the cell.

On the other hand, when a plasmolysed cell is kept in distilled water or hypotonic solution, before the cell is dead, water diffuses into the cell because of endosmosis.

The cytoplasm again gets inflated and exerts pressure against the cell wall. The central vacuole reappears.

This phenomenon is called deplasmolysis. Plasmolysis is a vital process in plant cells. It takes place only in the living cells. In dead cells, it cannot take place as the cell membrane loses its semipermeability.

Active transport is a passage of salt or ion from its lower to higher concentration by utilizing the energy from the cell through a living cell membrane.

Ions of potassium, sulphates, nitrates, etc., cannot pass through the cell membrane of the root cells easily since their concentration is higher inside the root cells in order to absorb water by endosmosis.

In order to obtain these ions they have to be forcibly carried inside the cell from their lower towards concentration their higher concentration which will require energy.

The energy will be supplied by breaking ATP molecules to release ADP and energy by the cell.

Hence, forcefully these ions can be taken inside the cell by breaking the concentration gradient. This is called active transport.

The upward movement of water along with dissolved minerals (sap) from roots to the tips of stem branches and their leaves is called ascent of sap.

The food manufactured in leaves gets dissolved in water and it flows down mainly on account of the force of gravity.