Flower is the most attractive, brightly coloured and conspicuous part of the plant. It helps in sexual reproduction and later forms fruit and seeds.

We are going to cover about parts of a flower and their functions in this article and your every doubt related to main parts of flower and structure and function of Flower is going to be clear. 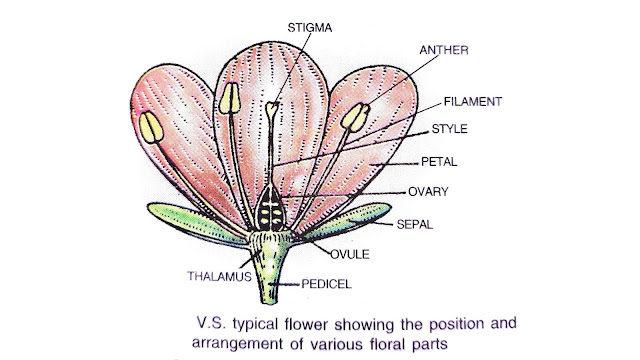 What are the main parts of Flower ?

The flower is attached with the stem or its branches with the help of a stalk called pedicel. If the flower is without pedicel, it is called sessile.

The other swollen end of the pedicel is the thalamus or torus. It represents a condensed shoot. On the thalamus usually four whorls of floral structures are present.

These four whorls from outer to inner side are :

They constitute the outermost and lowermost whorl. They are mostly small, green, leaf-like structures which cover an unopened floral bud. They protect inner whorls of the flower in the bud stage.

The sepals may be coloured like petals as in gulmohar (flame of forests). Such sepals are called petaloids. The sepals present in the outermost whorl may be all fused or free from each other. 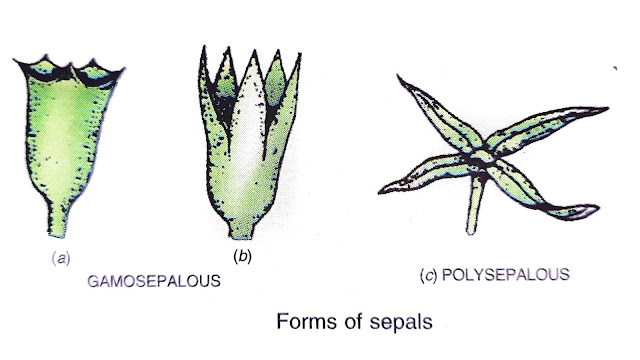 (a) Gamosepalous – When all the sepals are fused together, fully or partially, they are termed as gamosepalous e.g. Sunflower, China rose, Marigold, Petunia etc.

(b) Polysepalous – When all the sepals are free from each other they are called polysepalous. e.g. Ranunculus, Brassica.

Petals, that constitute the second whorl are collectively called corolla. They arise inner to and above the sepals on thalamus.

Like sepals they may also be fused or free. Correspondingly, they are of two types :

(a) Gamopetalous – When all the petals are fused fully or partially e.g. Petunia.

(b) Polypetalous  – When the petals are free from each other e.g. Hibiscus. 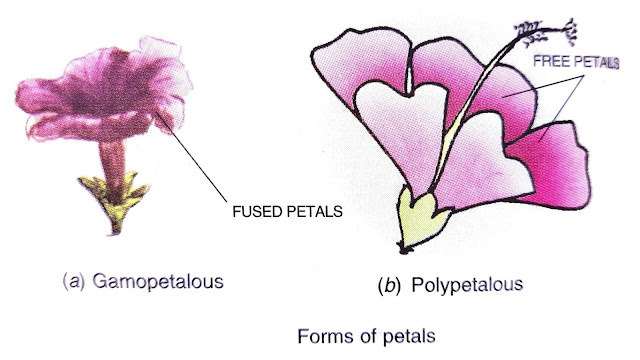 Read about Plants Tissues and Cell Theory : Discovery of Cell.

Perianth : In some flowers, such as Asparagus, non-essential parts of the flower are not differentiated into sepals and petals. They are collectively known as perianth.

The individual perianth lobes are called tepals. The tepals may be greenish (seploid) or beautifully coloured (petaloid).

The corolla or perianth may sometimes bear outgrowths, such as spurs, nectaries and corona.

Nectary : Special glands developed on or at the base of floral structures are known as nectaries which secrete nectar.

Corona : Sometimes, when the corolla is split, an additional whorl consisting of lobes, scales or hair is formed. It adds to the beauty of the flower.

Inner to and above the petals are present male reproductive organs called stamens. They collectively constitute the androecium. The stamens are present either in a single or more whorls.

Each stamen may be regarded as a highly modified leaf (called microsporophyll). A typical stamen is differentiated into two parts i.e. (a) filament (b) anther.

The filament is a long stalk. It supports a fertile head called anther. The two anther lobes are attached at the back by a small connective. Each anther consists of two lobes. 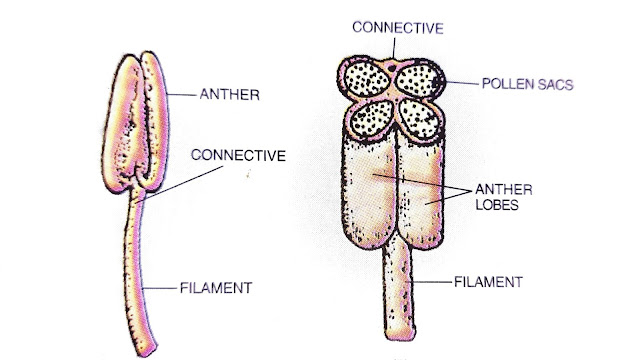 Each lobe is differentiated into two chambers called pollen sacs, filled with pollen grains. The wall of pollen grain is made-up of two layers, i.e.

Filaments are attached in different manners with the anther and accordingly, they are classified as

The stamens exhibit great diversity with respect to the fusion, their attachment to different whorls and size. Accordingly, they are categorized into the following types :

Located in the centre of the flower is the female reproductive organ called gynoecium or carpels. A flower is composed of one or more carpels.

The free occurring units of the carpels in a flower are called pistils. Each carpel is a flask shaped structure. It consists of three parts i.e.

Stigma : It is the tip of the carpel which is slightly swollen and usually sticky. It is meant for receiving pollen grains and their germination.

Style : It is a long tubular stalk that connects stigma with ovary.

Ovary : It is the swollen, basal part of the carpel. The ovary may be divided into either a single chamber (unilocular) or many chambers (multilocular).