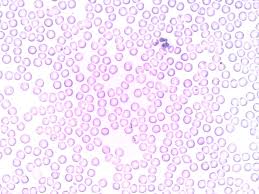 Red Blood Corpuscles are very small, measuring about 7.7 μm in diameter, biconcave, disc-like, denucleated cells in the mammalian blood. RBCs are the most abundant of all the three types of corpuscles.

Moreover, small size and concavity on either side of these cells provide more surface area for the efficient absorption of O2. The small size of these cells also enables them to pass through very narrow capillaries. more as to accommodate Erythrocytes are red in colour because of the presence of a respiratory pigment called haemoglobin (Hb).

It is present in the colourless spongy body or stroma of the RBCs. It is composed of haematin pigment and globin-a protein. Haemoglobin has great affinity for oxygen. It forms an unstable compound oxyhaemoglobin with 02. This oxyhaemoglobin haemoglobin and O, in the body tissues and O2 is supplied to the cells.

Formation, life and destruction of RBCs.

During maturation, the erythrocytes in mammals lose their nuclei, mitochondria, endoplasmic reticulum, etc. to accommodate more haemoglobin. Due to the loss of nucleus the life of erythrocytes is reduced to about 120 days. The worn out erythrocytes are destroyed in the liver, spleen and bone marrow. Their iron part is stored in the liver cells. Whereas, the rest is excreted as bile pigments (bilirubin and biliverdin).

The leucocytes (WBCs) in general are amoeboid (i.e., without any definite shape) nucleated corpuscles. They are known as phagocytes – as they engulf the foreign and worn out structures; scavengers m out tissues of the body; soldiers of the as they engulf the body – as they can accumulate at the site of a injury and fight with the invading micro-organisms, that may cause infection.

The leucocytes (WBCs) vary from 5000 – 9000/mm³ of human blood. They are produced either in the bone marrow or in lymphoid tissues, such as, lymph nodes, spleen, etc. Extraordinary increase in the number of leucocytes is called leukaemia (blood cancer) and decrease in their number is called leucopenia.

Based upon the structure, the leucocytes are classified into the following two types :
(a) Agranular and
(b) Granular

(a) leucocytes or Agranular Agranulocytes :

Agranulocytes are the leucocytes (WBCs) whose cytoplasm is not granular in appearance. They are produced in the lymph nodes, spleen and other lymphoid tissues. They have single large nucleus. These are further of two types:
(i) Monocytes
(ii) Lymphocytes

Granulocytes have granular cytoplasm. All the granulocytes are produced in the red bone marrow. Their nucleus are usually constricted into lobes. Depending upon the chemical nature of their cytoplasm they are classified into three types:
(i) Acidophils
(ii) Basophils and
(iii) Neutrophils.

Defence of the body against diseases and invaders is the most essential function of leucocytes (WBCs) . They perform the following functions:

They are the smallest sized corpuscles of all the three types. Their number varies from 2,00,000 – 3,00,000 per mm3 of blood. Their size is about 3 – 4 μm in diameter. They are denucleated. They are also produced in the red bone marrow from some giant cells called megakaryocytes. Its lifespan is about 3-5 days and are mainly destroyed in the spleen.

The blood platelets are responsible for the clotting of blood at injuries. Blood platelets on disintegration produce a chemical called thromboplastin or thrombokinese. It initiates the chain of reactions involved in blood clotting.