What are the Similarities & Differences between Respiration and Combustion ? – We are going to give answer of this question, so stay tuned with this article.

All organisms need energy to carry out their body activities. Plants also require it for a variety of metabolic activities which are of two types i.e. , anabolic and catabolic.

So lets get started…

Respiration is a catabolic process in which the living cells oxidise organic substances ( glucose ) with the help of oxygen ( aerobic ) releasing CO2 and water and energy or in the absence of oxygen ( anaerobic ) producing ethyl alcohol , CO2 and energy.

There are three important characters of respiration :

1. Breaking of glucose : It does not occur in single step but in a series of chemical steps. These steps occur in two major phases :

2. Enzymes : Each breakdown step is due to a particular enzyme.

This was all about the definition of respiration, lets discuss about “What is Combustion ?“.

According to Wikipedia, Combustion, or burning, is a high-temperature exothermic redox chemical reaction between a fuel and an oxidant, usually atmospheric oxygen, that produces oxidized, often gaseous products, in a mixture termed as smoke.

Combustion of an organic fuel in air is always exothermic because the double bond in O2 is much weaker than other double bonds , and therefore the formation of the stronger bonds in the combustion products CO2 and H2O results in the release of energy.

Similarities & Differences between Respiration and Combustion

Lavoisier pointed out that both respiration and combustion ( burning of coal , wood , oil , etc. ) are similar in several respects , but they also differ from each other.

Various similarities and differences between respiration and combustion are summarized below. 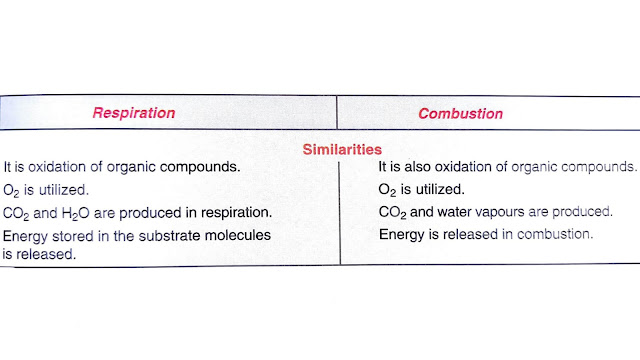 It was about similarities between Respiration and Combustion, lets discuss about their differences. 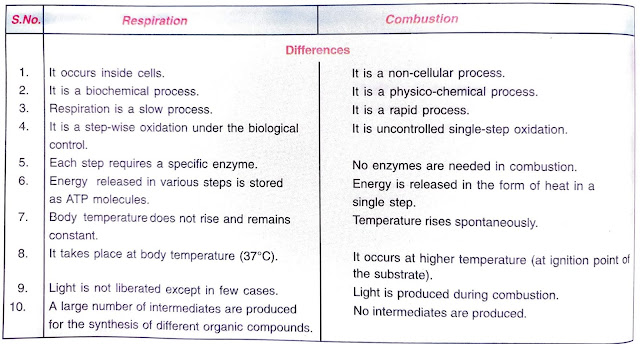 1. Aerobic or oxybiotic respiration : It is an oxygen dependent , enzymatically – controlled , complete , oxidative breakdown of respiratory substrates to CO2 and water with the release of energy.

2. Anaerobic or anoxybiotic respiration : It is an oxygen independent , enzymatically – controlled , incomplete , breakdown of respiratory substrates to carbon dioxide and alcohol in plants and lactic acid in animals.

Almost all plants tested have the ability to carry out anaerobic respiration for shorter or longer periods. A simple chemical equation for anaerobic breakdown of glucose to alcohol and CO2 is as follows :

From the equations , it is clear that in anaerobic respiration no substance is added from outside.

The aerobic oxidation of glucose is not a single step process. It involves a large number of steps which are grouped in the following four stages :

Glycolysis : It is an anaerobic process ( without the help of 02 ) that takes place in the cytoplasm of the cell. It is common in both the aerobic and anaerobic respirations , hence , also known as common pathway.

During glycolysis , one molecule of glucose is converted into two molecules of pyruvic acid in a series of reactions. Now , the pyruvic acid may enter into aerobic or anaerobic respiration.

It is also known as citric acid cycle or TCA ( Tricarboxylic acid cycle ). During this cyclical pathway acetyl Co – A is oxidised with the help of o , in a series of reactions producing CO2 and water.

Read about the process of Fertilization in Plants and Parts of a Flower and their Functions.

As the ATP molecules provide energy to carry out any activity in the cell , hence , these are called energy currency of the cell.

Respiration and photosynthesis are the two antagonistic and complementary processes in plants , involving gaseous exchanges. The substrates in one process are the end – products of the other process. 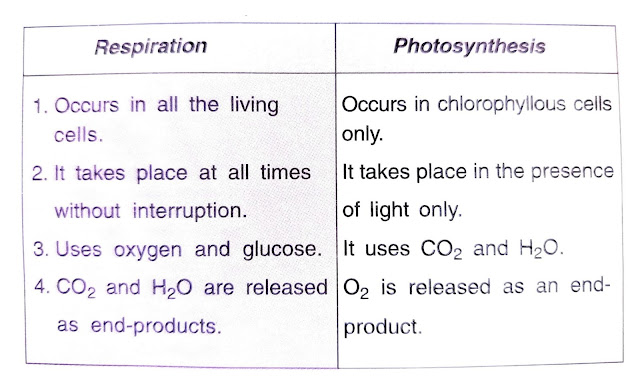 The differences between respiration and photosynthesis are summarized as follows : 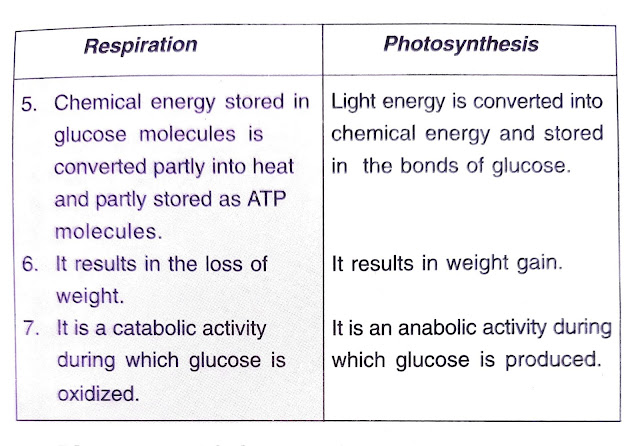 At this point the CO2 produced in respiration is consumed in photosynthesis and there is no gaseous exchange. This point is called compensation point.

Read about the two main types of Plant Tissues.

It once again reaches at the compensation point. In the night , there is no photosynthesis and the plants release large amounts of CO2 due to respiration.

This article mainly contain about the similarities and differences between respiration and combustion. The following topics are covered briefly in this article :