If you want to read about the ‘Structure of Seed‘, then this article is for you because we are going to cover everything about ‘what is the structure of seed ?‘.

In the life of flowering plants, seeds are very important structures as they help in the formation of new plants. A seed is a mature ovule after fertilization.

The ovule develops rapidly after fertilization using the food reserves. In addition to the development of new plants, seeds also help in the dispersal of a species as well as overcoming unfavourable conditions.

So lets discuss about the structure of seed…

What is the Structure of Seed ?

All seeds have some common features. Though, they vary in size, shape, colour and some other features. A typical seed is differentiated into three parts i.e. 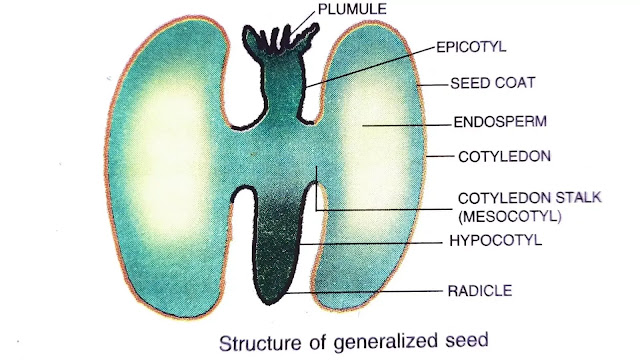 Each seed is covered by a protective covering called seed coat. It develops from the integument of ovule. The seed coat is differentiated into an (i) outer tough, protective testa-and (ii) inner thin tegmen.

The testa protects the seed from dessication, bacteria, fungi and insects. On the seed is present a scar called hilum. It represents the point of attachment of the seed with its stalk.

Adjacent to the hilum is present a minute opening called micropyle. Absorption of water as well as exchange of gases take place through the micropyle during germination of seed.

The micropyle is not easily seen in a dry seed. But, if a seed, soaked in water is pressed gently, some water and air-bubbles ooze out through this pore and it can be easily located.

An embryo is defined as a young miniature plant along with cotyledons, enclosed within the seed coat. The embryo is differentiated into (A) cotyledons and (B) embryo axis.

They are food laden, fleshy structures attached to the embryo axis. They provide nourishment to the embryo in the early stages of development. In endospermic seeds cotyledons are not massive e.g., castor.

(B) Embryo axis – It is the young or miniature plant differentiated into the following parts :

Food storage in the seeds

The seeds contain stored food material to be used during early development. The food is stored either in the cotyledons or in a special food storage tissue called the endosperm.

The seeds in which food is stored in the cotyledons and contain no endosperm are called non-endospermic or exalbuminous e.g. bean, gram, pea, alisma e.g., castor, cotton, maize, wheat, rice.

Those seeds which contain stored food in the endosperm are called endospermic or albuminous seeds.

Depending upon the number of cotyledons and presence or absence of endosperm, seeds are classified as shown in figure below. 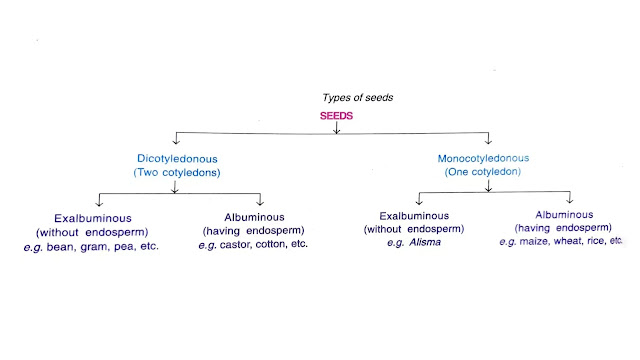 Bean seeds are kidney-shaped being convex on one side and concave on the other. The following external features are seen in the bean seed :

1. Seed coat – seed coats that develop from the two integuments of the ovule. These two coats are: Bean seed is surrounded by two

(a) Testa – It is the outer, smooth, thick and coloured protective layer. It protects the seed from fungi, bacteria and insects.

(b) Tegmen – It is thin, white, membrane-like inner seed coat. It is very firmly fused with the testa. It is often very difficult to separate it from the testa.

2. Hilum – On the concave side of the seed is present a scar called hilum. It is the point from where the seed is attached to the pod with the help of a short stalk called funiculus. On maturity, the funiculus detaches and leaves behind this scar.

3. Micropyle – Adjacent to the hilum is present a very minute pore called micropyle. Absorption of water and exchange of gases take place through the micropyle during germination of seeds.

4. Raphe – It is a ridge-like structure present around the median groove. It represents the portion of the stalk (funiculus) which remains fused with testa.

To study the internal structure of bean seed, it is soaked in water for a few hours. The soaking make the seed coats soft and easy to remove. On removing the seed coat we find the embryo.

5. Embryo – The embryo consists of the following parts :

(a) Cotyledons – The bulk of embryo consist of two fleshy structures called cotyledons. These store the food and provide nourishment to the developing embryo axis. The bean seeds do not contain endosperm, and thus are non-endospermic.

(b) Embryo Axis – In between the two cotyledons is present, a young miniature plant called embryo axis. It is differentiated into : 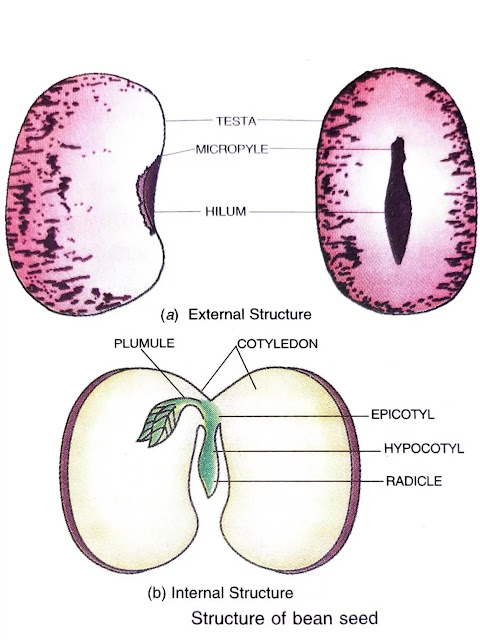 Maize is one seeded fruit called caryopsis. In maize seed the fruit wall (pericarp) is fused with the seed coat. The maize (corn) grain is a flat, almost triangular oblong structure. Externally it is differentiated in two unequal areas i.e.,

Also Read :
Parts of a Flower and their Functions
Advantages and Disadvantages of Pollination

The maize grain consists of the following parts :

1. Fused seed coat and pericarp – The maize grain is covered externally by a thin but firm, yellowish membranous layer. It is formed by the fusion of seed coat and fruit wall or pericarp.

2. Hilum and micropyle – These are not distinguishable in maize grain. The internal structure of maize grain is studied în a longitudinal section. It shows two distinct regions i.e. the upper large endosperm and the lower smaller embryo. These are separated by a prominent epithelial layer.

3. Endosperm – It forms the bulk of the grain and stores starch as reserve food material. The endosperm is surrounded by a special one-cell-thick layer called aleurone layer. It is rich in proteins.

4. Embryo – The embryo lies obliquely in the lower small part of maize grain. It consists of: – 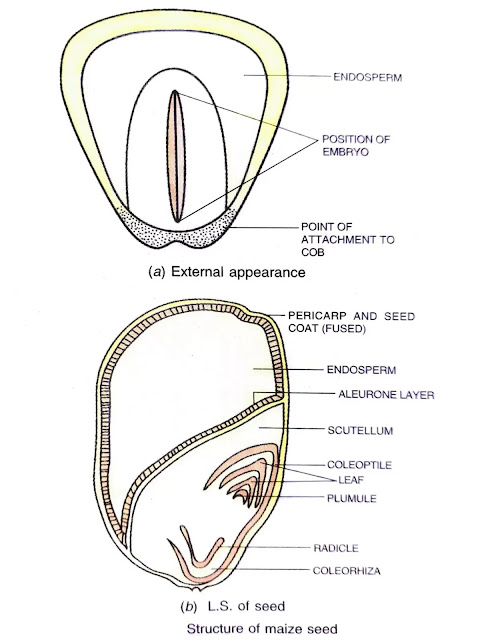 Q. What is called Seed ?

Ans. A fertilized and mature ovule is called seed.

Q. What is called Embryo ?

Q. What are the components of Embryo ?

Q. How Embryonal Axis is differentiated ?

Ans. The embryonal axis is differentiated into mesocotyl, epicotyl, hypocotyl, plumule and radicle.

Q. How Root and Shoot Systems are formed ?

Q. Where is the food store for the Germination of Seed ?

Ans. Food is stored for the early germination of seeds either in the cotyledons (exalbuminous) or in the endosperm (albuminous or endospermic seeds).

Q. What happens to Seed in the Dormancy Period ?

Ans. Seeds after shedding off from the parent plant, usually undergo a dormant period. During dormancy they may not germinate even if provided with all the favourable conditions.

Q. What is the main structure of seed plant ?

Ans. A normal seed is differentiated into three structures i.e.

This article mainly covered the topics related to the Structure of Seed’. The following topics are also covered briefly in this article :