‘Types of Animal Tissues‘, if you have any doubt related to this topic, stay tuned with this article because it has covered everything about ‘What is Animal Tissue and its types ?‘.

Before knowing more about ‘what are the four types of animal tissues ?‘, you should know ‘what is animal tissue ?‘ first.

What is Animal Tissue ?

Animal tissue refers to the group of cells of similar structure and function in animals.
According to wikipedia, Animal tissues are grouped into four basic types: connective, muscle, nervous, and epithelial. Collections of tissues joined in units to serve a common function compose organs. 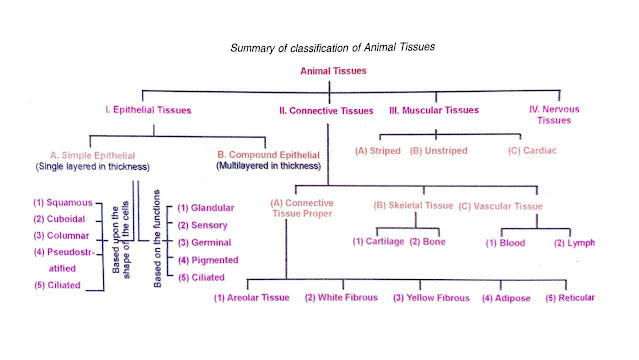 It was all about Animal Tissue, now lets discuss about the types of animal tissues.
So lets get start…

Based upon the structure and functions, simple tissues in multicellular animals are categorized into four types. These are :

(Epi means above and thelial means to grow)

The epithelial tissue performs a number of functions, such as :

Depending upon the number of layers of cells the epithelial tissue is of two types i.e., 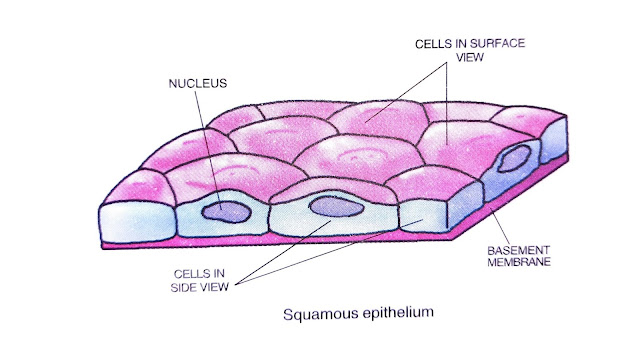 (1) Squamous epithelium : It is also called pavement epithelium. It contains flattened cells arranged end to end like tiles of a floor. The cells are very thin polygonal in surface view and are slightly bulging in the centre where the nucleus is present.

Functions : It protects underlying parts from injury entry of germs, harmful chemicals and drying up.

(2) Cuboidal epithelium : In this type of epithelium, the cells are cube-like or isodiametric. They are polygonal when seen from the surface.

Location : This tissue is found lining the body of nephrons of kidneys, gonads, sweat glands, etc.

Functions : It is protective in function.

(3) Columnar epithelium : In this type of epithelium the cells are pillar or column-like. These are arranged side by side in such a way so that the longitudinal axis of the cells is at right angle to the free surface. The cells are polygonal in surface view.

Location : This tissue is found lining the alimentary canal, the sensory organs, etc.

Functions : It is protective, secretory, absorptive and sensory in function.

Click here to read about advantage of Personal Cleanliness.

The pillar-like cells are broad on the free surface and narrow down towards the basement membrane. In between the narrow ends are present the small triangular cells.

Hence, it seems to be two-layered but is actually single-layered.

Location : It is found lining the trachea, bronchi, etc.

Function : It is protective in function.

(5) Ciliated epithelium : In this type of epithelium, the cells may be cuboidal, columnar or pseudostratified. On its free surface are present very fine hair-like cilia. These cilia are capable of beating.

Location : It is found lining the body of nephrons, bucco-pharyngeal cavity of frog and trachea. Functions : The cilia by their beating, set small structures, gases or liquids in motion over the epithelial surface.

Depending upon the functions performed by simple epithelial tissue, it is further classified into five types :

This type of epithelium is multilayered. The cells of the lowermost layer only, rest upon the basement membrane. It forms the epidermis of skin.

Difference between Plasma Membrane and Cytoplasm

As the name indicates, this tissue connects various tissues together in any organ. It is characterized by:

Depending upon the structure and functions performed by the connective tissue, it is further classified into three types : 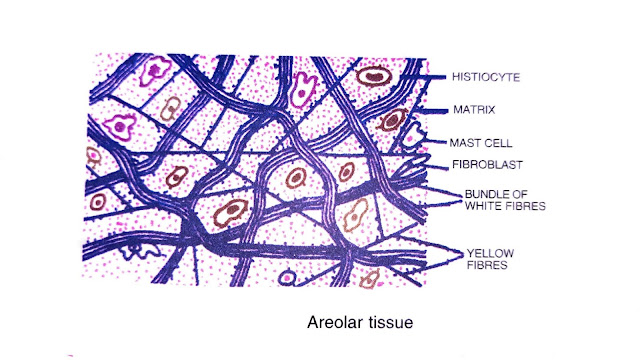 It is most abundant type of connective tissue. It holds various tissues together in any organ. It is further divided into the following types :

Areolar tissue : This is the basic and most abundant type of connective tissue. In the matrix of this tissue are scattered three types of cells i.e., amoeboid cells – which are phagocytic in nature, fibrocytes-secrete fibres and mast cells – that secrete the matrix.

Two types of fibres are present in the matrix. These are inelastic white fibres and elastic yellow fibres.

Location : It is found below the skin, in the kidney, testis, between and around the muscles, etc.

Yellow fibrous connective tissue : This tissue is very elastic due to the presence of a network of very elastic yellow fibres in its matrix.

All types of movements are brought about in the body with the help of muscular tissue. It is characterized by the following properties :

The muscular tissue is of three types: 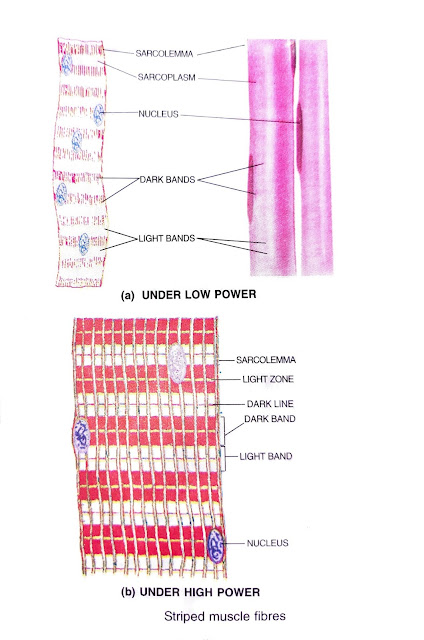 Striped or striated or skeletal or voluntary muscle fibres

These are the most abundant type of muscle fibres found attached to all the bones, hence, called skeletal muscle fibres.

They are voluntary in their activity, i.e., they are under the control of our will power, e.g., movements of arms, legs, etc.

These muscle fibres are bounded from the outside by an elastic but tough covering called sarcolemma. Bounded by the sarcolemma is a clear fluid called sarcoplasm which contains contractile fibrils called myofibrils.

Location : It is found attached to all the bones. But, the most common parts to find such muscles are arms, legs, body wall, face and neck.

Unstriped or non-striated or smooth- walled or visceral muscle fibres

These muscle fibres are spindle-shaped, i.e., pointed at the ends and broad in the middle.

They are usually present in the form of thin sheets, in the walls of hollow organs of the body, hence, called visceral muscle fibres.

They are bounded from the outside by simple plasma membrane. Myofibrils in these muscle fibres, do not show any light and dark bands.

Location : Such muscles are found in the walls of hollow organs, such as stomach, intestines, urinary bladder, etc.

These muscle fibres are found in the walls of heart only, hence, their name. Their structure is in between the striped and unstriped muscle fibres.

They show light and dark bands in their myofibrils. They are uninucleated. They also possess certain specific characters, such as, they are branched.

The branching forms a network. They possess dark discs called intercalated discs. They are involuntary in their activity and contract in a rhythmic manner.

Location : In the walls of heart.

Functions : The pulsating movements and rhythmicity of heart are controlled by these muscles. They never undergo fatigue.

It is a highly specialized tissue due to which the animals are able to perceive and respond to stimuli. It is characterized by the following properties :

The unit of nervous tissue is called nerve cell or neuron. It has a star-shaped cell body known as cyton. The cyton has one to many highly branched projections. 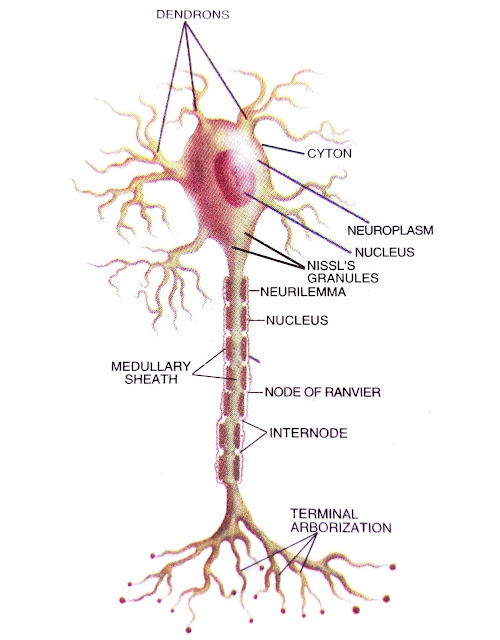 The cyton or cell body is covered by simple plasma membrane. Bounded by the plasma membrane is the ground substance called neuroplasm. It has a single nucleus in the centre.

The projections which arise from the cell body are of two types : i.e.,

(i) Dendrites or dendrons : which are one to many, highly branched small projections. They carry messages towards the cell body and

(ii) Axon : It is a single long projection of uniform thickness. It carries messages away from the cyton. The highly branched end of the axon is called terminal arborization.

Location : Neurons are found in the brain and spinal cord.