The primary requirement for sexual reproduction is the complete fusion of male and female gametes by the process called fertilization.

Before knowing more about the advantages and disadvantages of pollination, you should know ‘what is pollination ?‘ first.

The transfer and deposition of pollen grains from an anther to the stigma of a carpel in a flower is called pollination.

Pollination is of two types i.e.

When the pollen grains from the anthers of one flower are transferred to the stigma of the same flower or flowers borne on the same plant, it is called self- pollination or autogamy (auto-self, games-marriage).

Self-pollination mostly occurs in either bisexual flowers or monoecious plants (if flowers are unisexual). To achieve self-pollination, the flower must possess certain adaptations, such as:

1. Bisexuality (Hermaphroditism) – The flower should bear both the stamens and carpels so that, both the pollen grains and ovules are borne in the same flower.

2. Monoecious plants – If the flowers are unisexual, both the male and female flowers should be present on the same plant.

3. Homogamy – To ensure self-pollination, both the anthers and stigma of the bisexual flower or unisexual flowers present on the same plant, should mature simultaneously.

4. Cleistogamy – The pollen grains from the anthers get deposited over the stigma of the same bisexual flower, which never opens. For example some species of balsam, sundew, pansy, wood-sorrel, oxalis, commelina etc.

5. Bud pollination – In some plants e.g. pea, wheat and rice, the anthers and stigmas of bisexual flowers ripen before the opening of buds. Self-pollination occurs before the flower opens.

Read about Types of Plants Tissues and Cell Theory : Discovery of Cell.

When the pollen grains from the anthers of one flower are transferred on the stigmas of flowers borne on different plants belonging to same species, it is called cross-pollination or allogamy or xenogamy. Cross-pollination mostly occurs in dioecious plants having unisexual flowers. But, a large number of examples are available where in spite of bisexuality, plants prefer cross-pollination over self-pollination.

Nature always favours cross pollination because it helps in the formation of new and better new- combinations of characters. For the purpose of cross-pollination, following adaptations are found in the plants :

(ii) Dichogamy – If the flowers are bisexual, the male and female organs mature at different times. The flower may be :

(a) Protandrous – When the anthers mature earlier than the stigma, the flower is said to be protandrous, and this phenomenon is termed as protandry e.g. Salvia, sweet pea, sunflower etc.

(b) Protogynous protogynous if the stigma matures earlier than the anthers. This phenomenon is called protogyny e.g. magnolia, custard apple, peepal, etc.

Difference between Plasma Membrane and Cytoplasm

(iii) Self-sterility – In this condition, the pollens from the anthers of a flower fail to germinate on the stigma of the flowers borne on the same plant. It happens because of genetic incompatibility e.g. Nicotiana, potato, orchids, etc.

(iv) Herkogamy (herkos-a fence barrier) – The flower possesses certain structural barrier. It does not allow self-pollination though, the flower is bisexual and both the anther and stigma mature simultaneously, e.g. in pansy and iris a hood covers the stigma.

(v) Heterostyly – In this condition the flower has style and anthers at different heights. Either the style is very long or anthers are at more height so that it discourages self- pollination e.g. primrose, Oxalis, Linum etc.

In cross-pollination, pollen grains from the anthers of one flower are transferred to the stigma of another flower.

The pollen grains need some abiotic or biotic agent in pollination, such as wind, water, insects, birds or animals to transport and bring about pollination. The most common agents are the wind and insects.

It is also done artificially by the plant breeders for producing useful and better varieties.

Flowers pollinated by wind have the following characteristics :

As the anthers burst, the light and dry pollen grains are blown by the wind. Many of them land on the silky and feathery stigma of neighbouring plant, hence, bringing about cross-pollination.

Flowers are pollinated by water in case of aquatic plants, such as Hydrilla, Vallisnaria, etc. In such cases the following characteristics are found:

In Vallisnaria, pollination is very interesting. The plants are dioecious. The female (pistillate) flowers have long stalks. Whereas, the male (staminate) flowers have short stalks and are submerged.

The male flowers detach from the parent plant. They are carried by water currents up to the female flowers. In this way. pollination takes place when the anthers burst open setting the pollen grains free, after striking stigmas.

Cross-pollination caused by animals is called zoophily. Depending upon the agent used, cross- pollination is categorised as (A) Entomophily (by insects) ; (B) Ornithophily (by birds) ; (C) Chiropterophily (by bats) ; (D) Malacophily (by snails) ; (E) Artificial (by man), etc. 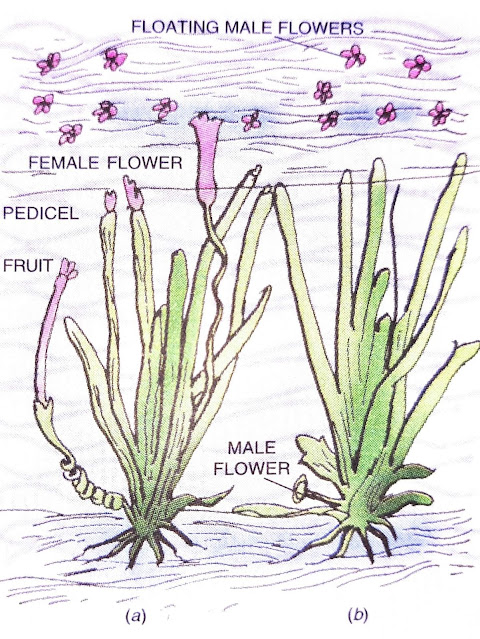 (A) Entomophily – Insect-pollinated flowers have the following characteristics :

Only one lobe of each anther is fertile whereas, the other sterile lobe forms a plate. It lies at the mouth of the flower just above the lower lip of the corolla. When the insect (bee) enters the corolla tube, it pushes the lower sterile anther lobe upwards.

The fertile lobe swings down by lever mechanism and dusts the back of the bee with a cloud of pollens. When the bee visits another flower, it transfers the pollens to a mature stigma, thus causing cross pollination.

The bees are attracted by colour,scent and nectar. The two lateral wing petals act as landing platform for the bee. Whem the bee lands on the wing petals, the keel petals are also pushed down because of the weight of  the  bee.

The stamens and stigma touch the undersurface of the bee that may be carrying pollens from another flower. It may transfer some of the pollens to stigma thus, causing cross-pollination. 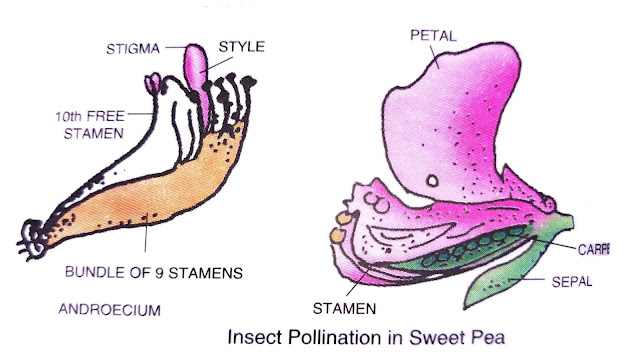 B) Ornithophily – There are only a few flowers pollinated by birds as in canna, Bignonio. In such plants, the following characteristics are present.

(C) Chiropterophily –  It is cross-pollination performed by way of bats. The bats bring about pollination only in the tropical plants.

The bat- pollinated flowers are large and strongly scented as the bats are nocturnal e.g. Bauhinia megalandra. They produce abundant nectar and pollen.

(D) Malacophily – It is the pollination brought about by snails e.g. Arisaema.

The pollen grains stick to the feet of elephants and are carried to the stigma of other flowers bringing about cross-pollination.

(F) Artificial pollination – Man plays an important role in bringing about pollination artificially for producing useful and better varieties. Pollen grains from the mature anthers of a flower from better yielding quality plant are carefully removed.

They are dusted on the mature stigma of other plant belonging to same or related species. These pollinated flowers are now covered with polythene bags till fruits and seeds are produced. This method is very common in garden plants. 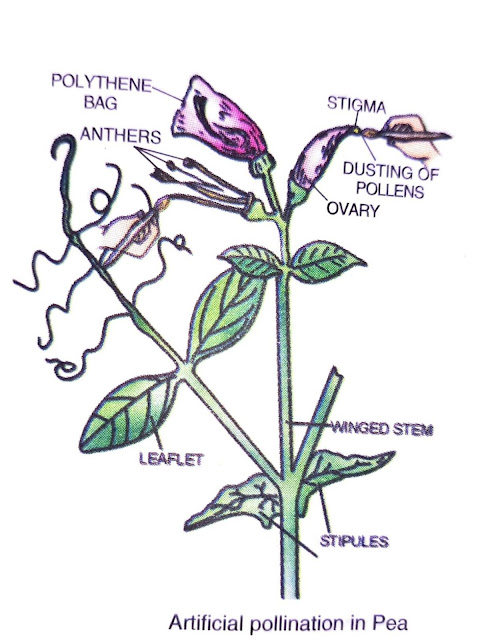