Skip to content
Endocrine(ductless) glands that control, communicate, coordinate and integrate various functions of all the body organs, by the secretion of chemical messengers called hormones collectively constitute endocrine system. 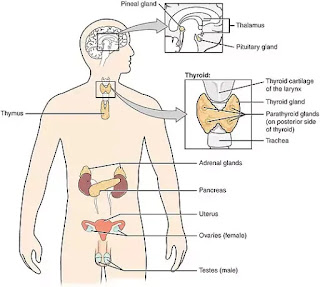 The hormones are released directly into the bloodstream. There are no ducts in endocrine glands, hence, called ductless glands.

Most their widespread despite distribution by the blood, are highly specific in their action. Cells that respond to a particular hormone are called target organ cells.

These are listed below:

The purely endocrine glands (Holocrine) are pituitary, thyroid, parathyroid, adrenal, pineal and thymus. Their sole function is to produce hormones.

Whereas partly endocrine glands (Heterocrine) in addition to secretion of hormones also perform some other functions. These include pancreas, gonads (testes and ovaries), lining of alimentary canal, kidneys, placenta, etc.

It constitutes about 75% of the total weight of the gland. Anterior pituitary secretes 6 hormones- GH, LTH, TSH, ACTH, FSH, LH or ICSH, out of which except GH all others are tropic hormones. Tropic hormones are those which stimulate certain other endocrine glands to secrete their secretions.

It is a small middle part of pituitary gland. It secretes hormone MSH (melanocyte stimulating hormone). This hormone controls the distribution of pigments in the skin.

Posterior lobe of pituitary serves as a storage area for the two hormones – ADH or antidiuretic hormone or vasopressin and oxytocin. These two hormones are secreted by the hypothalamus but released by the posterior pituitary.

Antidiuretic hormone (ADH) : It prevents the formation of large amount of urine and thus decreases the water loss from the body (conservation of body water). It can also raise the blood pressure by bringing about constriction of the blood vessels (vasoconstriction) in several tissues.

Deficiency of ADH causes diabetes insipidus (water diabetes). In this urination is frequent, resulting in loss of water from the body making a person become thirsty.

Oxytocin : It has two actions. It stimulates powerful contractions by the pregnant uterus during childbirth. The term oxytocin itself means swift childbirth. (Greek oxys-swift, tokos-childbirth).

It also causes milk ejection from lactating breast. Under its influence, alveoli release the milk into the ducts of breast.

It is the largest endocrine gland (5 x 3 cm) weighing about 25 g. It lies on the ventral and lateral sides of trachea just below the larynx in the neck.

It is brownish-red, butterfly shaped, bilobed gland, one lobe present on either side of the trachea. The two lobes are interconnected by a transverse glandular band called isthmus.

Histologically, it consists of about 3 million small oval or rounded thyroid follicles.

Adrenal glands are located above the kidneys, fitting like a cap over these organs. The outer portion of the gland is called cortex, the inner substance, the medulla. These two parts function as separate endocrine glands and secrete different hormones.

Adrenal cortex secretes many hormones, all of them are steroid in nature. They can be placed into 3 broad classes as follows :

(a) Mineralocorticoids : As the name indicates, these hormones regulate mineral metabolism; mainly sodium and potassium. Aldosterone is the hormone of this group and it increases reabsorption of sodium in the renal tubules. It helps in raising the sodium chloride content of blood.

(b) Glucocorticoids : They are concerned with carbohydrate, protein and fat metabolism. They are under the control of ACTH from adrenohypophysis. The main hormones of this group are cortisol and corticosterone. They have following biological action:

(c) Sex corticoids : They stimulate the development of external sex characters in males. Adrenal androgen is the hormone of this group.

The adrenal medulla secretes catechola- mines or emergency hormones. Adrenalin (epinephrine) and noradrenalin (norepine- phrine) are the two hormones of this group. Both adrenalin and noradrenalin act on organs and tissues supplied by sympathetic nerve fibres of the autonomic nervous system.

They produce most of the effects like those of sympathetic stimulation. They mainly control the contraction of involuntary muscles including the muscles of heart and arteries.

In man, adrenalin is secreted much more than noradrenalin. At rest adrenal medulla secretes a very small amount of hormones. But, a sharp increase in the rate of release of these hormones occurs during emergencies (fight or flight reactions).

For example, if there is a danger for life of an organism, it can react to this by running away (flight) for safety or by giving a tough fight to the enemy (fight reaction).

Adrenalin is also known as emergency hormone. It is secreted in large amount at the time of emergency. It helps to face physical stress like fall in blood pressure or blood sugar, muscular exertions (like dance and running), pain, cold, injury and emotional stress like anger, fear and grief.

Pancreas is both an exocrine as well as an endocrine gland. It is located just below the stomach in the loop of duodenum of small intestine. It is a flattened, almost triangular structure.

(b) Beta cells (B-cells) : These cells secrete hormone insulin that converts glucose to glycogen (glycogenesis) in the liver and muscle cells. It helps to maintain the blood glucose level constant.

(c) Delta cells (8-cells) : These secrete hormone somatostatin which is a growth hormone-inhibiting hormone (GH-IH). It inhibits the secretion of both glucagon and insulin.