Skip to content
A pair of ears present on the lateral sides of head, one on either side are the organs for perceiving the sound waves. The ears convey these sound waves to the brain.We are going to discuss about different parts and functions of ears in sense organs.

It helps in analysing the pitch, quality, timbre, intensity, and direction of the sound waves. Moreover, the ears are related with totally unrelated function of maintaining balance and body equilibrium. Parts of ear : Human ear is divided into three parts: 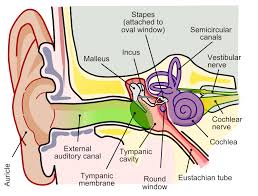 It is the outer part of the ear which is further differentiated into three parts :
(a) External pinna,
(b) External auditory canal and
(c) Tympanum or eardrum.

It is an oval, skin- covered flap that projects from the side of the head. It collects sound waves and directs these waves into the external auditory canal.

It is an oblique, S-shaped, 2.5 cm long tube. It extends from pinna upto the tympanic membrane. The oblique passage prevents the hard objects hitting the tympanum directly. In the beginning of this canal are present hair that act as strainer.

They do not allow the dust and other foreign particles to enter into the ear. In the internal lining are also present a large number of ceruminous or wax glands that secrete earwax.

Earwax lubricates the tympanum for proper functioning. In external auditory canal the combination of hair and wax prevents entry of dust particles into the ear.

(c) The tympanum or eardrum

It is a rounded flap of the diameter of a pencil. It is stretched tightly like a drumhead between the external and middle ear.
The function of external ear is to collect sound waves and convey it to the middle ear.

It is an air-filled, irregular space called tympanic cavity. It is an almost airtight cavity except that it opens into the pharynx through eustachian tube.

It acts as a ventilator to equalize pressure of air on both the sides of tympanic membrane. The inner boundary of middle ear is formed by a thin bone that bears two apertures covered by membranes.

Running across the middle ear from tympanum to oval window is present a more or less mobile chain of three small bones called ear ossicles.

These ear ossicles are outer malleus, middle incus and inner stapes. The malleus is hammer-shaped and Its handle is attached with the tympanum.

The incus is anvil-shaped. Whereas the stapes which is the smallest bone in human hody is stirrup-shaped.

It is attached with the membrane over oval window. The three ear ossicles form a leverage system. They transmit and amplify the sound waves from external to the internal ear.

It is represented by an irregular, very structure called membranous delicate labyrinth. It is fitted into a similarly shaped space called bony labyrinth in the temporal bone.

One end of each semicircular canal is swollen forming an ampulla. In each ampulla there is present a sensory spot or sensory cells known as crista. The semicircular canals (cristae) help in dynamic equilibrium or dynamic balance while body is in motion.

It is the middle bag-like or sac-like structure. It is further differentiated into the following two parts : (i) Utriculus and (ii) Sacculus. Each part contains one sensory spot or sensory cells called macula which helps in static equilibrium.

It is spirally coiled like a snail’s shell having 22 coils. The cochlea is divided into three horizontal chambers called scalae upper (scala vestibuli), middle (scala media), and lower (scala tympani).

The three scalae are separated from each other by two membranes : upper Reissner’s membrane and lower Basilar membrane.

The upper and lower scalae are full of perilymph and the middle scala is full of endolymph. The basilar membrane has got sense organs of hearing known as organs of corti or spiral organs.

It consists of five longitudinal rows of sensory hair cells which serve as auditory receptors. The sensory cells transform the sound waves into nerve impulses. These are carried to the brain through auditory nerve.

Sound produced causes vibrations in the air which travel as waves known as sound waves.

This moving fluid pushes against sensory cells (cristae) sending nerve impulse to the brain through nerve fibres attached to them via auditory nerves.

CAUSES OF DEAFNESS OR HEARING IMPAIRMENT

Hearing impairment or deafness may be due to :