Skip to content
The word Chromosome is derived from two words (Chrome- coloured, soma- body). These are small but thick, rod like darkly stainable structures. These are seen in the nuclei of dividing cells only at metaphase and anaphase stage of cell division.
Whereas in non-dividing cells they are seen as a network of thread-like structures called chromatin reticulum. Here we will discuss about Chromosome structure, Chromosome Numbers and Chromosome types. 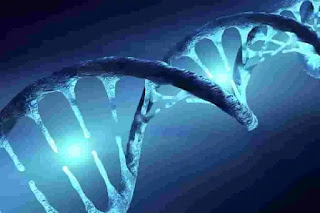 The Chromosome Numbers always remains constant in the cells of each species. Depending upon the chromosomes numbers, the cells are said to be haploid (n) or diploid (2n).

On the other hand, a diploid (2n) cell contains two sets of all the chromosome types found in it or we can say that the chromosomes are present in pairs.

The two chromosomes of one pair are exactly similar in the shape, size, structure and bear genes controlling same characters on the same loci. Such chromosomes are called homologous chromosomes.

The diploid chromosome numbers of some species clear that the diploid number is always even because the chromosomes are always paired.

Moreover, it is very clear that the characters of an individual do not depend upon the number of chromosomes e.g., fowl and dog are totally different but the chromosome numbers is the same in both of them.

Similarly, the complexity of an individual is also free of the chromosome number e.g., protozoans are the most simple creatures but they possess numerous chromosomes.

The characters and complexity of an individual rather depend upon the types of genes present on the chromosomes.

The two chromatids are joined together at a point called centromere. Parts of chromatids on the two sides of centromere are called arms.

The chromonema is surrounded by matrix which is covered by a covering called pellicle. Some chromosomes possess small a fragment or knob like structure called satellite. Such chromosomes are known as SAT chromosomes.

The terminal regions on either side of the chromosome structure are known as telomeres. The chromosomes consist of about 40% DNA and about 60% histones (a particular type of protein).

The histones and DNA form a kind of complex in which the DNA strands wind around a core of eight histone molecules. Each such complex is called nucleosome.

A single human chromosome may have about one million nucleosomes. Nucleic acid : Chemical analysis of chromosomes shows two types of nucleic acids DNA and RNA.

The DNA (Deoxyribo nucleic acid) is a very large molecule (Macromolecule). It is composed of two strands, coiled around a common axis in a double helix. The double helical structure of DNA molecule was shown in 1953 by James. D. Watson and Francis H.C. Crick.

They inferred each that in DNA molecule there are two long and parallel strands or chains helically coiled around the same axis giving an appearance of a spiral staircase.

In these nitrogenous bases, guanine is complementary to cytosine and thymine to adenine.

Genes are the specific parts of a chromosome composed of DNA. They determine the hereditary characters.

They are responsible for the transmission of characters from one generation to another. They are located in chromosomes and occupy a fixed position in the chromosomes.

They are arranged in a single linear order in a chromosome. Scientists have identified  around 30,000 genes in human chromosomes.

1. Chromosomes form the only link between the two generations.

2. They control the synthesis of structural proteins which help in cell divisions, cell repair and cell growth.
3. Sex chromosomes (XX and XY) determine the sex of individuals.
4. Through the process of crossing over, chromosomes induce variations.
5. Chromosomes undergo mutations (sudden changes) and contribute towards evolution of life.
6. Chromosome Functions are as controller of cell metabolism.

Based upon he position of centromere the chromosomes re-categorized into four chromosome types :

(a) Metacentric : The centromere is present in the centre and the two arms of the chromatid are equal. During anaphase such chromosomes appear V shaped.

(b) Submetacentric: Centromere is slightly away from the centre so that one arm is slightly larger than the other. Such chromosomes are L shaped during anaphase.

(c) Acrocentric : The centromere is present near one end of the chromatid so that one arm is larger than the other. Such chromosomes look J shaped during anaphase.

(d) Telocentric : The centromere is present at one end of the chromosome so that it looks I or rod shaped during anaphase. 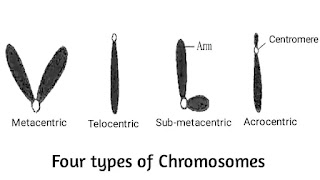 The chromosomes which determine the sex (maleness or femaleness) of an individual in sexually reproducing organisms are called sex chromosomes or allosomes or idiosomes.

All the chromosomes other than sex chromosomes are always found in pairs of homologous chromosomes in diploid cells and are known as autosomes.

For example, in human cells 22 pairs of chromosomes are autosomes. They determine the characters other than sex.