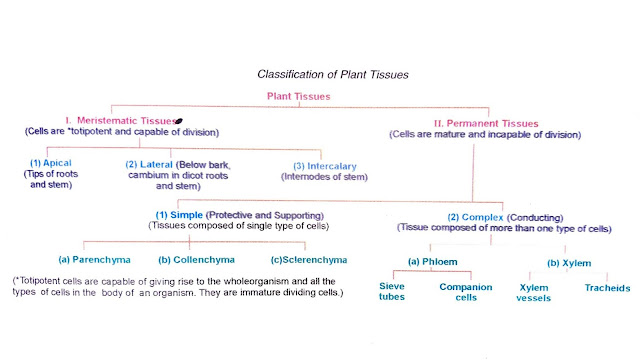 Before knowing more about ‘two main types of plant tissues‘, you should know about ‘what are Tissues ?‘ and ‘what are plant tissues and its types ?‘.

Tissues are groups of similar cells, having same origin and performing a specific function. The name tissue was given by Bichat. The study of tissues is known as histology, a term introduced by Meyer.

According to Wikipedia, Tissue is a cellular organizational level between cells and a complete organ. A tissue is a group of similar cells and their extracellular matrix from the same origin that together perform a specific function.

The tissues first evolved in coelenterata. Tissues are categorized into the following types:

(A) Simple tissues (B) Compound tissues

If all the cells present in a tissue are similar in structure, functions and origin, it is called simple tissue.

A tissue is said to be compound tissue if it contains more than one type of simple tissues. Tissues are present in all multicellular organisms, whether plants or animals.

In higher plants, the cells and tissues differ very much in their kind, form and origin. Based upon the capacity to divide, the plant tissues have been classified into the following two types :

This type of tissue is composed of a group of similar and immature cells. These cells divide to form new cells and help in increasing the length and girth of plant. 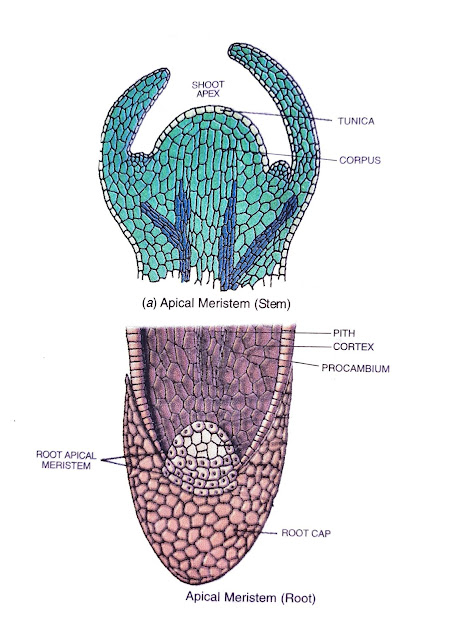 The main characteristics of this tissue are :

This type of tissue is found at all the growing points of a plant, such as tips of roots, stems and branches. It is also present between the bark and the wood of trees where it leads to increase in the thickness of stem.

Depending upon the location, meristematic tissue can be categorized into three types:

1. Apical (Terminal) Meristem : This meristematic tissue is present at the growing tips of roots, stems and also in the growing young leaves near the tips of young stems.

2. Lateral Meristem : This meristematic tissue is present below the bark and in the vascular bundles in dicot stem. It is responsible for increasing the diameter of the stem e.g. Cambium.

3. Intercalary : This meristematic tissue is present at the internodes of the stems and at the leaf- bases.

(i) Apical meristem brings about the elongation of the roots and stems, hence, increases length of the plant. It is called primary growth.

(ii) Lateral meristem helps in increasing the diameter and girth of the plants. It is called secondary growth.

(iii) Intercalary meristem causes increase in the length of an organ. 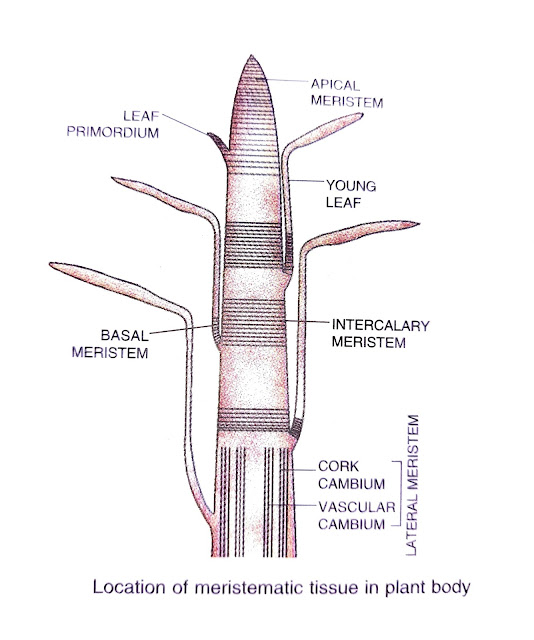 What is the difference between Plasma Membrane and Cytoplasm ?

What are the Advantages of Personal Cleanliness ?

The permanent tissues are composed of differentiated cells which have lost their capability to divide. They have definite shape, size, thickness and functions. The permanent cells may be dead or living.

Depending upon the structure, the permanent tissues are classified into the following two types :

These tissues are made-up of cells which are structurally and functionally similar. They include protective and supporting tissues.

These tissues are primarily protective in function and include :

(i) epidermis, and (ii) cork or phellem.

Cork or Phellem : In older dicot roots, stems, tissues at the periphery become cork cells or phellem cells. Cork is made-up of dead cells with thick walls and do not have any intercellular spaces.

Read about Cell Theory and types of Cell Division.

Though these tissues are primarily concerned with providing support to the plants, yet they also perform many other functions. These tissues are categorized into three types :

(a) Parenchyma (b) Collenchyma (c) Sclerenchyma

Parenchyma : (Gr. para-beside ; enchyma- in filling) Typically, parenchyma consists of isodiametric living cells which may be oval, rounded or polygonal in shape.

They have a thin, smooth and elastic cell walls. Small intercellular spaces are generally present for the exchange of gases.

Internally, each cell encloses a large central vacuole and peripheral cytoplasm containing nucleus. Parenchyma is the most abundant tissue in the plants.

It is found in the non-woody or soft parts of the stems, roots, leaves, flowers, fruits, etc. It is also distributed in pith, medullary rays and packing tissue in xylem and phloem. 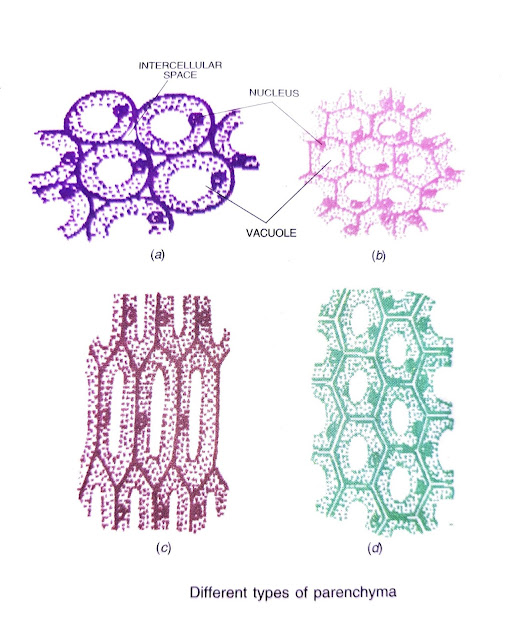 Collenchyma : (Gr. kolla-glue) Collenchyma is made-up of living cells which are usually elongated with thick corners. Intercellular spaces are usually absent in this tissue.

Collenchyma cells may be oval, circular or polygonal in shape. Few chloroplasts are usually present in the cells of collenchyma.

Also Read :
What are the two types of Nervous system ?
Types of Transpiration

Sclerenchyma : (Gr. scleros-hard) Sclerenchyma is composed of extremely thick- walled cells with little or no protoplasm. The cells are highly elongated, narrow, spindle shaped and dead.

The cell walls of these cells are highly thickened with the deposition of lignin. Such cell walls are called lignified. The cells of sclerenchyma are closely packed like the tiles of a floor without any intercellular spaces.

Middle lamella present between the two adjacent cells is a very thin layer of cementing substance.

Cells of sclerenchyma are of two types i.e., (a) fibres and (b) sclereids. Fibres are very long, narrow, thick and lignified cells, usually present in the form of longitudinal bundles.

Sclereids also called grit cells or stone cells are irregular cells. They are also dead and develop in various parts of the plants, such as cortex, pith, phloem, hard seed coat, etc. In the thick walls of both the fibres as well as sclereids are present thin areas called pits.

Sclerenchyma occurs in abundance either in patches or definite layers. They are found in stems roots, veins of leaves and hard coverings of seeds and nuts.

Sclerenchyma is composed of long narrow, thick and dead cells. These cells develop thick walls in due course of time to provide strength to the plant body.

The rigidity and strength in parts of plant is because of this tissue. Ropes, mats that we commonly use in our everyday life, are obtained from sclerenchyma cells. 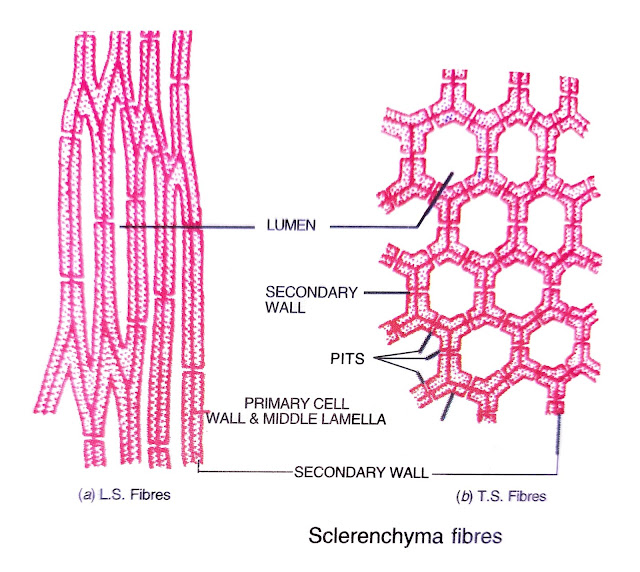 The complex tissue consists of more than one type of cells which work together as a unit. Complex tissue helps in the transportation of organic materials, water and minerals up and down the plants.

It is also known as conducting or vascular tissue. The common types of complex permanent tissues are : (A) Xylem or wood (B) Phloem or bast. Xylem and phloem together form vascular bundles.

Xylem : Xylem is also known as wood. It is a vascular and mechanical tissue. Xylem cells are thick walled. They are found in the form of tubular passages. Xylem consists of four types of cells called xylem elements. These are :

(b) Vessels or Tracheae : Much elongated multicellular tubes.

Except xylem parenchyma, all other xylem elements are dead. Vessels are the most important cells of all the four types of xylem elements.

The transverse walls between the vessel elements are partially or fully dissolved to form continuous channels or water pipes. The rings present in the trunk of an old tree are the xylem rings. By counting the number of rings, we can determine the age of a tree.

Phloem : Phloem is a living, conducting or vascular tissue. It contains tubes, like xylem, but it performs no mechanical function. Phloem consists of four elements or cells.

These are : (a) Sieve tubes, (b) Companion cells, (c) Phloem parenchyma, and (d) Phloem fibres.

(a) Sieve tubes : These are slender, tube-like structures made-up of elongated, thin-walled cells placed end to end. The end walls of sieve tube cells are perforated by numerous pores and are called sieve plates. The nucleus of sieve tubes degenerates on maturity, however, cytoplasm persists.

(b) Companion cells : These are thin walled and elongated cells attached to the lateral sides of the sieve tubes. These cells have very active cytoplasm and large elongated nucleus. These cells are living. They control the activity of sieve-tube elements.

(c) Phloem parenchyma : They are thin walled living cells. They store food and help in the lateral transportation of food.

(d) Phloem fibres : These are scleren- chymatous fibres which provide mechanical strength to the plant.

Title : What are the two main types of Plant Tissues ?

Living organisms appeared on Earth as single celled (acellular) organisms. They were able to perform all the functions necessary for life.

Even today, millions of such acellular organisms are present, e.g., Amoeba, Paramecium, Chlamydomonas, etc. They can perform all the activities of life, but without much efficiency.

Thus, the body of a multicellular organism may have three tier organization leading to division of labour. To perform the assigned functions efficiently, tissues, organs and organ systems got modified, specialised and differentiated.

These are the following topics covered briefly in this article :