Skip to content
If you have a question that, “What are the two types of cell division ?“, then you are at the correct place because we are going to discuss all basics related to cell division.
The most significant manifestation of life is reproduction which may be at organismic, cellular or molecular level.
This is equally true in case of the simplest organisms like Amoeba and highly complex ones as humans, animals or plants. Let me tell you about what are the two types of Cell division. Cell division is of two type- Mitosis and Meiosis. 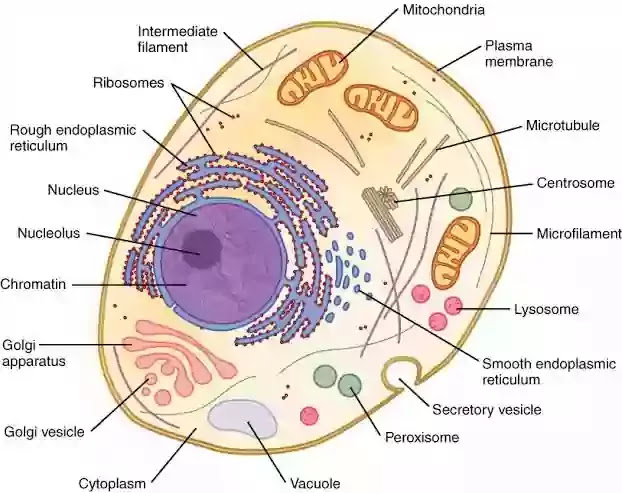 WHAT IS CELL DIVISION ?

Cell division is the method that enables life to perpetuate, generation after generation.

Cell division produces new cells from pre-existing ones in order to help in growth, replacement, repair and reproduction in all living organisms.

These characters are transmitted from parent cell to the daughter cells in the form of genes which are located on chromosomes. These chromosomes (the hereditary materials) are present in the nucleus of the cell.
The chromosomes are able to carry characters because of the fact that they duplicate before the beginning of cell division. The chromosomes contain DNA.

Every cell capable of divisions passes through recurring events called the cell cycle. The sequence of events including duplication of DNA, synthesis of other cell constituents, growth and division, that a cell undergoes from the time of its formation upto its division into daughter cells is called cell cycle.

Interphase is the non-dividing, preparatory phase during which a cell prepares for the next cell division and grows to the same size as their mother cell. The chromatin reticulum, also called chromatin network, duplicates (makes its copy), due to the duplication of DNA contents. It is further divided into three sub-stages i.e.,
(a) G1-phase
(b) S-phase and
(c) G2-phase

G1 is the longest-phase of interphase. In this phase the cell is metabolically active. The RNA and proteins are synthesized and cytoplasm increases hence cell grows in size.

The cell carries out volume of normal functions and gets prepared for the next phase. There is no change in the DNA contents of the cell during this phase.

Synthesis of DNA takes place and the chromosomes get duplicated (make its copy).

This is a shorter growth phase in which synthesis of DNA stops. However, formation of RNA and proteins,  necessary for cell division, continues. It prepares the cell to undergo mitotic phase (  the next cell devision ) and thus the cell cycle goes on.

It is the dividing phase of the cell. During this phase the nucleus as well as the cytoplasm divides into two daughter cells, undergoing four important stages. These are Prophase, Metaphase, Anaphase and Telophase. After Telophase the new cells formed can again carry on with the cell cycle and this process goes on and on.

The cell cycle cannot go on endlessly. At some places it stops permanently like in brain and nerve cells, once formed in the embryo do not divide further. Once dead, they are not replaced.

At some places it stops temporarily, like the liver cells which divide only once every one to two years to replace damaged cells. At other places it divides till it is needed, like the epithelial lining of the alimentary canal last only for 5 days and that of skin epidermis cells about 15 days.

In older people the number of cells produced are less than that die, hence, the cell population goes down in them making the activities go slow.


What are the two types of cell division ?

The cell division is of two types:

Mitosis is a type of cell division during which a cell divides into two daughter cells, each containing similar and same the number of chromosomes as present in the parent cell.

Since, the number of chromosomes in this type of division, remains the same, hence, Mitosis is also called equational cell division.

This type of cell division takes place in somatic or body cells during growth, development and repair of an organism, hence, also known as somatic cell division.

Mitosis was first of all described by Strasburger (1875) in plant cells and Walter Flemming (1879) in animal cells and named it as “Mitosis” in 1882. As we know, the cell prepares itself for mitosis during interphase.

The following three important events take place during interphase :-
(i) The cell grows to the same size as their mother cell.
(ii) RNA and proteins synthesized and volume of cytoplasm increases.
(iii) DNA synthesis takes place and chromosomes get duplicated.

During interphase, chromosomes exhibit a minimum degree of condensation or coiling but cannot be distinguished individually. There is an increase in volume of interphase nucleus as well as nucleolus. The cell is quite active metabolically.

Since DNA synthesis occurs, therefore, no alternative is left for the cell except to divide by entering the mitotic phase. At the end of interphase, series of changes start in the physical and chemical organization of the chromosomes.
The process of mitosis is studied in two parts
(A) Karyokinesis
(B) Cytokinesis

(A) Karyokinesis (Division of nucleus)

All the changes in nucleus that occur during cell division are collectively termed as Karyokinesis. During karyokinesis many events take place in a particular sequence.
All these events are studied in the following four stages :
1. Prophase
2. Metaphase
3. Anaphase
4. Telophase

(i) It begins with the shortening and thickening of chromosomes. These chromosomes are clearly visible inside the nucleus.

Each chromosome splits longitudinally to form two chromatids. They are joined at one point called centromere or kinetochore.
(ii) The centriole in the centrosome of animal cell divides into two. The centrosphere (structure which surrounds the centrioles) disappears from the centrosome, setting the centrioles free. [The animal cells may contain one or two centrioles in the centrosome. The dividing animal cell (a) contains one centriole which splits into two in the early prophase]
(iii) Centrioles develop very fine eyelash like threads called astral rays. Centrioles along with astral rays are called asters.
(iv) The two asters start moving towards the opposite poles. By the end of prophase they reach at the opposite poles.
(v) Between the two asters develop very fine proteinaceous thread like structures called spindle fibres. Asters along with spindle fibres is called spindle or mitotic apparatus. Such a spindle is called amphiastral spindle. In plants, the spindle is without asters and is called anastral spindle.
(vi) The chromosomes get attached with the spindle fibres from their centromeres.
(vii) The nuclear membrane and nucleolus start disappearing in the middle ce prophase and totally disappear by the end.

(i) The chromosomes begin to show peculiar movements. They arrange themselves between the poles, on the equator of the spindle.

(i) Each centromere splits into two daughter centromeres, each retaining one of the two chromatids. The structure so formed are now known as sister chromatids or daughter chromosomes.

(ii) Sister chromatids (daughter chromosomes) of each pair so formed, start moving towards the opposite poles. This movement is perhaps brought about by the contraction of spindle fibres.
(iii) By the end of anaphase, out of each pair of sister chromatids (daughter chromosomes), one reaches at one pole and the second at the other pole of the spindle.
4. Telophase : (Telo = end)

(i) Each sister chromatid (daughter chromosome) which reaches at the opposite poles starts uncoiling, thinning and elongating. They form a network like structure called chromatin reticulum.

(ii) Around each chromatin reticulum at the two poles, reappears nuclear membrane giving rise to two daughter nuclei.
(iii) Nucleoli reappear in each daughter nucleus.
(iv) Spindle fibres, aștral rays disappear.
(v) The centrioles duplicate. They are surrounded by centrosphere again producing centrosome near each daughter nucleus.
The process of karyokinesis is followed by cytokinesis.


(B) Cytokinesis ( Division of cytoplasm )

Division of the cytoplasm is known as cytokinesis. In plant cells, cytokinesis takes place by the formation of cell plate.

Whereas, in animal cells it is by the appearance of a furrow (constriction) in the cytoplasm. In plant cells, vesicles from Golgi bodies appear at the equator of the spindle.
It forms a cell plate. It divides the cytoplasm into two equal halves, one around each daughter nucleus. Then primary cell wall is laid on either side of the cell plate.
In animal cells, a constrietion (furrow) appears parallel to the equator of spindle, in the cell membrane. It deepens towards the centre of the cell, finally dividing the cytoplasm in two halves.
One half of the cytoplasm is around one daughter nucleus and the other around the second daughter nucleus. It completes the formation of two daughter cells.
They contain exactly similar and the same number of chromosomes as present in the parent cell.

Mitosis has a manifold significance, such as:

What is Cell Theory ?, How was the Cell discovered ?

The term meiosis was coined by Farmer and Moore in 1904. It is a special type of cell division that produces sex cells or gametes.

It takes place in the reproductive organs (testis and ovary) in humans to produce sperms and ova. In flowering plants, it takes place in the anthers and the ovary to produce pollen grains and ovules respectively.
Meiosis is a type of cell division in which a undergoes two successive divisions producing four daughter cells each containing half the number of chromosomes as compared to the parent cell.

Since the number of chromosomes in this type of division is reduced to half in the daughter cells, hence, it is also called reductional cell division.

Meiosis as a reduction division :

It is called reductional division because the number of chromosomes is reduced to half in the daughter cells.
This division always takes place in those cells in which the chromosomes are present in the form of pairs of homologous chromosome.

II) Meiosis-Il (Equational division) :- Meiosis-II division is much similar to mitosis. It is known as equational division, because it maintains the number of chromosomes received by the daughter cells at the end of meiosis-I.
Hence, in the end of meiosis four haploid cells are produced from one diploid in which each daughter cell has half the number of chromosomes as compared to plant.

(i) Reproduction : Meiosis takes place during the formation of gametes or sex cells. It takes place inside the reproductive organs (testis and ovary) in animals to produce sperms and ova.

In flowering plants it takes place in anthers to produce pollen grains and ovules to produce eggs.

(iii) Variations : Crossing over during meiosis helps in the formation of recombinations or variations.

(iv) Evolution : The formation of new species from pre-existing ones by modifications in them is called evolution. Variations are produced during meiosis and these variations are the cause of evolution.

(v) Crossing Over : This is the phenomenon in which the maternal and paternal chromatids of the homologous chromosomes, during first reduction division, link together to form chiasma, through which exchange of genetic material takes place, resulting in genetic recombination (produces new combinations combination provides innumerable variations in the progeny due to which children of same parents, however, similar are different from each other in certain respects.