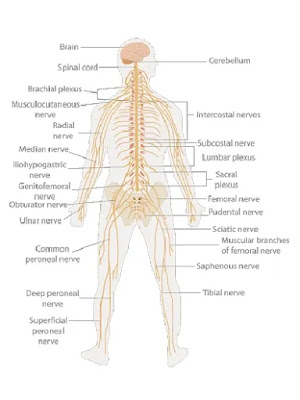 In our body and in the body of other higher animals are present two such systems which control and coordinate the diverse activities of millions of smaller cells, body organs, etc.
One system called nervous system functions by the conduction of nerve impulses like the conduction of an electric current.
But before knowing about the two types of Nervous System , you should know about Nervous System.
Right…

What is Nervous System ?

The system that controls and coordinates all the activities of various body parts in response to external and internal stimuli by the conduction of nerve impulses is called Nervous System.

An even more remarkable feature of the nervous system is its ability to respond to several stimuli simultaneously and spontaneously.
For example…
While watching television we can take our meals and also respire simultaneously. Every set of co-ordinated movements, whether skilled performances or routine tasks like cycling or driving a car, all involve the integrating powers of the nervous system.
It is the master system of the body. It controls all other systems by sending and receiving messages through special cells called neurons ( unit of nervous system ).

NEURON – The unit of Nervous system

The nervous system perceives various stimuli, convert them into impulses, convey these impulses to the controlling centre – the brain. In the brain these impulses are converted into orders which are then carried to effectors i.e. muscles and glands. 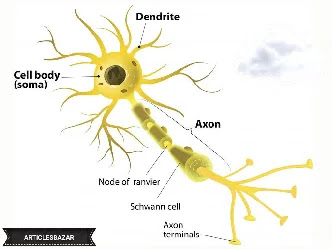 (1) Cyton : The main part of neuron is cell body called Cyton or perikaryon. It is bounded from the outside by a simple cell membrane. Its cytoplasm is called neuroplasm.

In addition to all the usual cell organelles present in an animal cell, neuroplasm also neurofibrils (help in transmission of impulses) and Nissl’s granules (synthesize proteins for cell).Nissl’s granules are small fragments of endoplasmic reticulum with ribosomes. The only organelle which is absent is centrosome. This is the reason a nerve cell does not have contains ability to divide.
(b) Dendrites : These are one to many, highly branched but small projections arising from the cyton. They conduct nerve impulses from synapses towards cell body.

(c) Axon : From the cyton arises always one very long process called axon. It may be from few millimetres to one metre in length.
In white all neurons ( unit of nervous system ) it is surrounded by a insulating sheath (covering cells) callea neurilemma. An additional sheath called myelin is present in some neurons which shows gap throughout the length called nodes of ranvier.Some axons may have side branches called collaterals. Each axon terminates into a bulb like structure called synaptic knob which have certain chemicals called neurotrans- mitter.
As the impulse reaches the terminal end of an axon, the neurotransmitter named as acetylcholine is released which sets new impulse in the dendrites of next (adjacent) neurons ( unit of nervous system ).An enzyme soon breaks this chemical to make synapse ready for next transmission. The axon terminal of one neuron is very closely placed to the dendrites of another neuron without any physical or protoplasmic contact.
This close proximity is known as synapse. The gap present between the dendrites and axon terminal is called synaptic cleft.
Related Post – Composition and Function of Blood

According to their functions, the neurons ( unit of nervous system ) are categorized into three types :
(a) Sensory (Afferent) neurons
(b) Motor (Efferent) neurons
(c) Association (Connector) neurons.

(a) Sensory (Afferent) neurons : These neurons ( unit of nervous system ) carry sensory impulses from the sense to the central nervous system. organs

(b) Motor (Efferent) neurons : These neurons transmit impulses from the central A nervous system to the effectors i.e. muscles or glands.

An axon of a neuron covered by one or two sheaths is called nerve fibre. The nerve fibre small (microscopic) upto one metre be very may in length. Depending upon the sheaths covering the axon of neuron here called neuraxis.

Functions of the myelin sheath :

(b) Non-myelinated nerve fibres : In these nerve fibres the axon of neuron is covered by only one sheath called neurilemma. Myelin sheath is absent.

You may like this article –
Describe the role of kidney as a part of Excretory System.

What are the two types of Nervous System ?

I. Central Nervous System (CNS) : All the parts of the nervous system which are present along the median longitudinal axis of the body constitute the central nervous system. It consists of brain and spinal cord.

II. Peripheral Nervous System ( PNS ) : It is formed by all the whitish thread-like nerves that connect the various body parts with the CNS.The PNS is again divided into 2 subdivisions :

1. Somatic nervous system (SNS) : It is the voluntary part of PNS. It conducts impulses to and from skeletal (voluntary) muscles, bones, ligaments, joints and skin receptors.

Position, Protection and Meninges The human brain is highly developed. It is largest amongst all the animals. In an average it approximately weighs about 1350 g.

It is made-up of about 1000 billion neurons. The brain is placed and well protected in the cranial cavity or brain box of skull, It is surrounded by three protective membranous covering called meninges which continue backwards on the spinal cord. 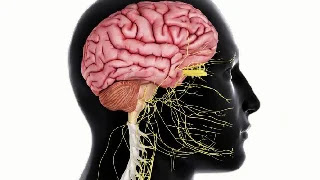 Between the meninges, spaces are present. These are filled with cerebro spinal fluid (CSF). The same fluid is also filled in the central spaces of brain and central canal of spinal cord.

So here is its function…

Human brain is a whitish, bilaterally symmetrical structure. It is divisible into three regions :

It is differentiated into three parts :
(a) Olfactory lobes
(b) Cerebrum
(c) Diencephalon

(b) Cerebrum : It is the largest part and forms 4/5th weight of the brain. It consists of right and left lobes called cerebral hemispheres.
They cover all the parts of the brain superiorly and lie side by side. Their surface is highly folded or convoluted with ridges and grooves to increase the surface area.Each cerebral hemisphere is hollow from inside and their walls have 2 regions, outer cortex and inner medulla. The outer portion of cerebrum contains grey coloured cell bodies and hence called grey matter, which is folded to form convolutions.
The folds (gyri) and grooves (sulci) increase the surface area to accommodate more neurons and hence believed to have more intelligence.The inner portion consists of axons of neurons which is white in colour, hence, called white matter. The two cerebral hemispheres are separated from each other by a very deep groove known as cerebral fissure.
The two hemispheres are held together by a transverse band of nerve fibres called corpus callosum. Each cerebral hemisphere is divided into four lobes called frontal lobe, parietal lobe, occipital lobe and temporal lobe.

(c) Diencephalon : It is a small rhomboidal lobe. It is completely covered superiorly by large cerebrum but visible from the inferior surface as a small area.

It lies between cerebrum and midbrain. It is distinguishable into two parts- the thalamus and hypothalamus.

Mid-brain of humans is significantly small, thick stalk, about 2 cm long. It connects the fore-brain with cerebellum and pons of hind brain.

It is the posterior, small part of the brain. It is differentiated into three parts :
(a) Pons varolii
(b) Cerebellum
(c) Medulla oblongata.

(a) Pons varolii : It is centrally located below cerebellum.

Functions :
It carries impulses from medulla oblongata to fore-brain. It also carries impulses from one hemisphere of the cerebellum to other and coordinates muscular movements on both sides.(b) Cerebellum : It is the largest part of hind-brain. It is present below the cerebrum and above the medulla oblongata, behind the pons.
It consists of two large lateral lobes called cerebellar hemispheres. Its surface is marked by a large number of transverse fissures which give it a laminated appearance core of white matter.
It has an inner surrounded by grey matter (cortex) which is greatly folded. It has no convolutions.

Functions :
It helps to maintain the balance or equilibrium during movements and it controls and coordinates muscular activity (balance of the body).

(c) Medulla oblongata : It is about 2.5 cm long that extends from pons to spinal cord. It is almost triangular in shape. It is also hollow from inside.
Functions :
It controls the involuntary activities of internal organs like beating of heart, movement of breathing, sneezing, swallowing, vomiting, coughing, hiccupping and peristaltic movement of alimentary canal.

The spinal cord is a long, unsegmented, cord like structure extending from medulla oblongata of brain through the neural canal of the vertebral column to the lumbar region.

It is about 45 cm in length and 35 g in weight. It is also covered by three membranes called meninges. Spaces present between these meninges are full of cerebro-spinal fluid (CSF).

It consists of Cranial and Spinal nerves.

All spinal nerves are mixed nerves.

That part of the nervous system which controls all the involuntary activities of various body parts is called autonomic nervous system. It is divided in two parts :

(A) Sympathetic
(B) Parasympathetic

Conclusion or Summary of the Nervous System