What is Cell Theory ? How was the Cell discovered ? – if you also have the same kind of question, stay reading this article because your every doubt is going to be clear in this article which cover about cell theory, discovery of cell & principles of cell theory. 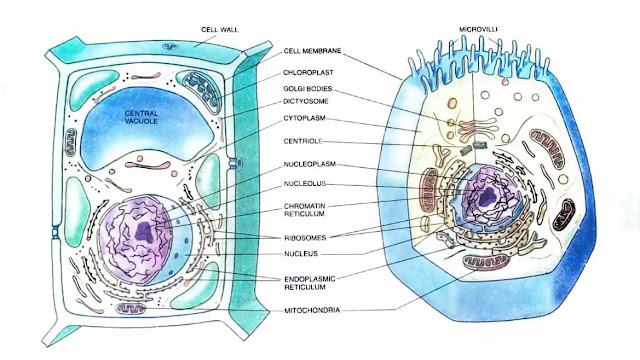 Biology (Bio-life, logos-study) is the study of living organisms. All the living organisms in this universe without exception are made-up of very small compartments called cells.

All the functions, such as nutrition, respiration, excretion, irritability, reproduction, sensation, etc., performed by an organism are the sum total of all the activities performed by its constituent cells.

Before discussing more about Cell Theory, Discovery of Cell, What are the main points of cell theory and all that, one should know that “What is a Cell ?” and the Definition of Cell.

So let’s get start…

Cell is a universal principle of Biology that all living organisms from the tiniest to the largest are composed of small compartments called cells. Now, the question that comes to our mind is “What is a cell ?”

You may take any body organ or body as a whole, it is formed by aggregates of cells. “Unit of functions’ means, any function performed by an organ or organism is the activity of its constituent cells.

It may be said that the smallest structure in the body of an organism which can perform all the functions and characteristics of living organisms, is the cell.

The basic structure and functions of various parts of all the cells are similar, but they may get differentiated and specialized to perform certain specific functions.

That is why, to understand the living organisms properly, we have to study the structure, functions and other aspects of a cell.

How was the Cell discovered ? ( Discovery of Cell )

The cells are very small in size and are invisible to the unaided eye. That is why, cells were discovered only after the invention of the microscope. 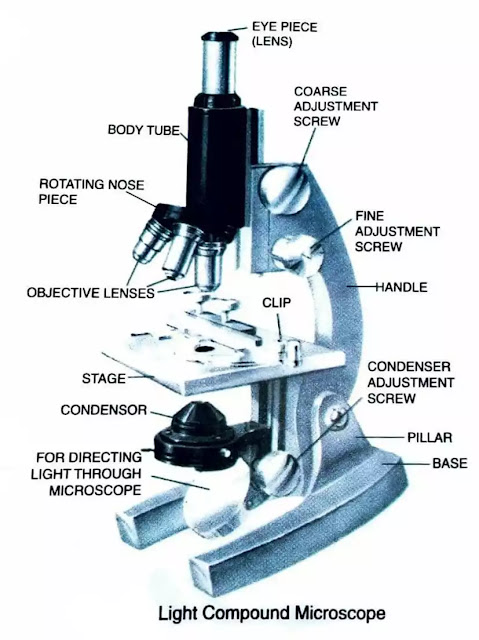 Microscope is an instrument that can magnify and resolve small objects. The first simple microscope was invented by Antony Van Leeuwenhoek (1632-1720).

It is believed that he constructed about 400 microscopes using single magnifying biconvex lenses of different focal lengths. He discovered bacteria in 1674 and sperm cells in 1678.

How cell was discovered for the first time ?

Robert Hooke (1635-1703), an English scientist, used a combination of two lenses to achieve more magnification. Such a microscope is called compound microscope.

It was actually Robert Hooke who discovered cell while studying a very thin slice of cork under his self made microscope. The word ‘cell’ was derived from a Latin word cella – meaning very small compartment.

He actually saw cell walls of dead cells but not the complete cell. Starting with the discovery of cell by Robert Hooke (1665) it is the result of more than 300 years of accumulated experience which has given us the present knowledge of cells.

Robert Hooke did not confine himself to cork cells. He cut sections of different plants through different parts. He discovered that they were all made of box-like compartments more or less similar to those which he observed in cork.

The ordinary compound microscope of today is greatly improved design of the original Hooke’s microscope. It can magnify an object upto 2000 times. 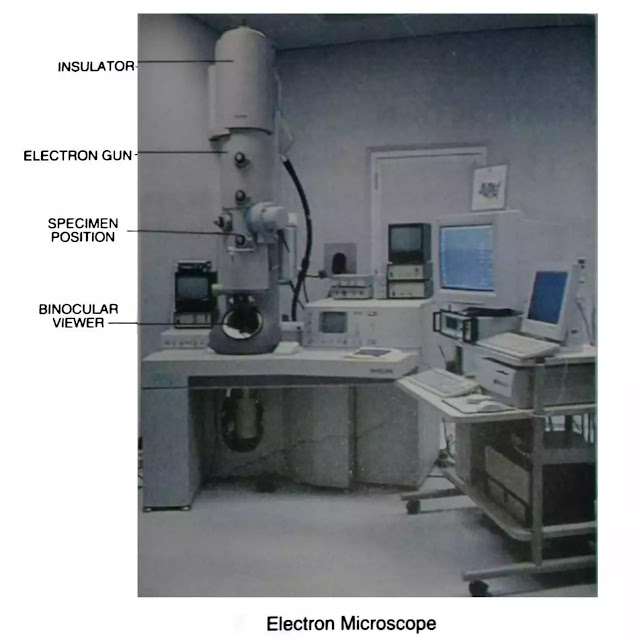 The invention of electron microscope by M.Knoll and E. Ruska gave a very high magnification power than that of the compound microscope. It uses beams of electrons which are bent by magnets. It can magnify object upto 2 lakh times.

What is Cell Theory ?

According to Wikipedia, Cell Theory is the historic scientific theory, now universally accepted, that living organisms are made up of cells, that they are the basic structural/organizational unit of all organisms, and that all cells come from pre-existing cells.

In the year 1838, a German botanist, M.J. Schleiden, and in 1839 a German zoologist Theodor Schwann, after studying plants and animals independently put forward a theory called the Cell Theory.

What are the main points of cell theory ?

What is Protoplasm Doctrine ?

The term protoplasm was given by J.E. Purkinje in 1840. Schultze in 1861 proposed the ‘Protoplasm Doctrine’ which states that all living cells are made of a living substance called protoplasm.

Huxley, first of all recognized the importance of protoplasm. In 1868, he described the protoplasm as “Physical basis of Life.” The protoplasm occurs everywhere in a cell.

It contains granules of different shapes and sizes, suspended in solution. It is the sol-state in which constituent molecules are free to move.

In the gel-state the constituent molecules are compactly arranged. On heating, the protoplasm becomes opaque and coagulates.

In the protoplasm of different cells, in all 35 elements, such as carbon, hydrogen, oxygen, phosphorus, sulphur, calcium and many others have been identified.

What is the Size of a Animal Cell ? (Size of the Cell)

These cells can be seen with the help of a microscope. The average size of an animal cell varies from 5 to 20 um (1 µm=1000 mm) but it may be as small as 0.1 um in diameter as in Mycoplasmas (PPLO – Pleuro Pneumonia Like Organism), which is the smallest known cell.

On the other hand…

It may be as large as 15 cm in diameter as the eggs of Ostrich (the largest known cell). It may be as long as one metre in length as in the case of some nerve cells (the 1/ longest cells).

The smaller cells are more efficient and active metabolically because of

The higher nuclear-cytoplasmic ratio allows the nucleus to have better control of metabolic activities. Whereas, the higher surface area-volume ratio allows quicker exchange of materials between the cell and its surroundings.

Shape of a Cell

Shape of different cells is variable. It depends upon the following factors :

These were the factor affecting the shape of a cell. 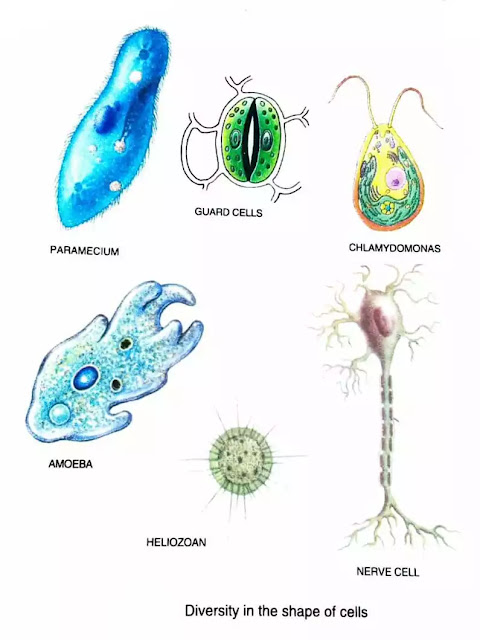 The invention of magnifying lenses has led to the discovery of microscopic world. It is now known that single cell may constitute a whole organism as in Amoeba, Paramecium, Euglena, Chlamydomonas, bacteria, etc.

On the other hand…

Cells divide to produce cells of their own kind. All cells thus come from pre- existing cells.

Earth as a Unique Planet

The number of chromosomes is definite in the cells of each species, e.g., every human body cell contains 46 or 23 pairs of chromosomes.

The number of chromosomes in the cells of a other-other species are different-different.

Rather, these are the genes which determine the characteristics and functioning of all species.

THE ANIMAL AND PLANT CELL

Though, the basic structure and functions of various cells and their organelles in animals as well as plants are similar, yet, there exist some differences between the two. These differences are summarized as follow:

Depending upon the structure, the cells are of two types, viz.

These are the cells with primitive nucleus called nucleoid. The nucleoid is without any nuclear envelope. Moreover, all the membrane-bound cell organelles are absent. They are found in all bacteria, blue green algae and Mycoplasmas PPLO-(Pleuro Pneumonia Like Organism).

These cells contain an advanced nucleus encircled by own nuclear envelope. A large number of membrane bound cell organelles are present.

Title : What is Cell Theory ? How was the Cell discovered ?

In this article, we have mainly discussed about what is cell theory and discovery of cell i.e, how was the cell discovered. The following points are covered briefly in this article :

Tag : What is Cell Theory ?, How was the Cell discovered ?